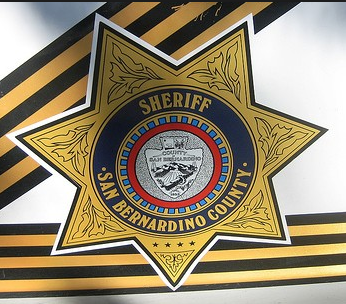 ORO GRANDE-(VVNG.com):  A 25-year-old transient was arrested in Oro Grande on Monday for assault with a deadly weapon, child endangerment, and vandalism after throwing large items at passing vehicles. Just before 11:50 a.m. deputies from the Victor Valley Station responded to a call regarding a male subject yelling and throwing items at motorists on National Trails Highway near Molly Brown’s Country Cafe.

Upon arrival, deputies located the suspect, identified as Jess Densler Forbes. Forbes according to witnesses, was angry and dislodged an 8-foot long steel bus stop sign, weighing about 50 pounds. He threw it into traffic multiple times, hitting 4-5 passing vehicles.

San Bernardino County Sheriff’s officials said that one of the motorists  attempted to back his vehicle away from Forbes to avoid the attack, but Forbes threw the post like a spear into the vehicle’s hood near the windshield. Forbes also threw a bicycle, brick, and a mailbox at passing motorists.

No injuries were reported, although six people, including two children, were endangered due to Forbes actions. The damage is estimated to be about $6000.00.

Forbes was booked at the High Desert Detention Center and is currently being held in lieu of $50,000.00 bail.

Anyone with information regarding this investigation is urged to contact Deputy Malcom Page or Deputy Matt Lewis at (760) 552-6800. Callers wishing to remain anonymous are urged to call the We-tip Hotline at 1-800-78-CRIME (27463) or you may leave information on the We-Tip Hotline at www.wetip.com.