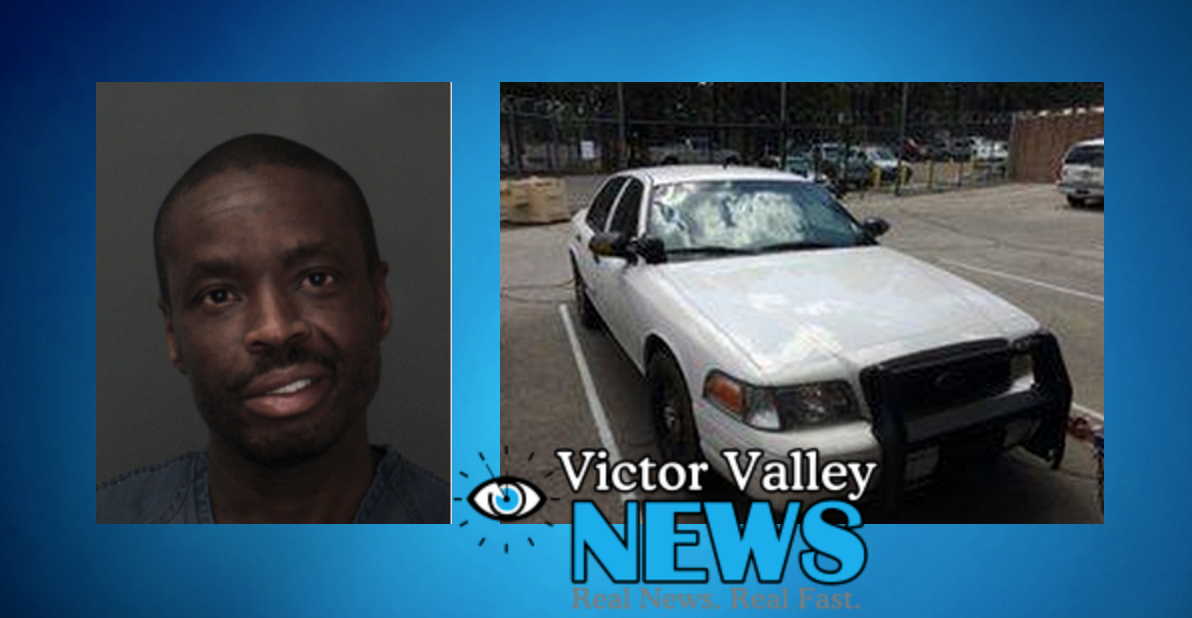 BIG BEAR-(VVNG.com):  A 44-year-old San Bernardino man was arrested for law enforcement on Saturday, June 27th at approximately 5:00 p.m.  The man, identified as 44-year-old David Anthony Battle, was witnessed driving a white Crown Victoria through the roadblocks that were set out to create a perimeter for the lake fire.

The vehicle was driven by Batttle, who was wearing an authorized fire department uniform and represented himself as a firefighter.  The vehicle was stopped at a checkpoint where Battle claimed that he was attempting to locate a fire crew. Approximately 15 minutes later the white Crown Victoria was located at the Incident Command Post in the parking lot of Big Bear High School.

Deputies made contact with Battle, who could not provide proper fire department identification. Upon further inspection, deputies noticed that the tires on the vehicle were bald. Deputies then ran the vehicle’s VIN number and determined that the vehicle was stolen from the City of San Bernardino approximately 2 weeks earlier. Upon further investigation, deputies located multiple stolen uniforms from various fire agencies, fire equipment, a fire radio stolen from the Lake Fire incident, and a stolen handgun.

Battle, who faced 2003 and 2011 charges for impersonating a peace officer, was still on felony probation for a previous charge of grand theft auto.

Battle was taken into custody without incident and booked into the Big Bear Jail on felony charges of possession of a stolen vehicle, being a felon in possession of a firearm, and carrying a stolen loaded firearm. He remains in custody at West Valley Detention Center in lieu of $50,000 bail, with an arraignment hearing set for this afternoon in San Bernardino County Superior Court.

Anyone recognizing David Battle or his vehicle, and has had contact with him where he represented himself as an official member of a fire department or law enforcement agency is requested to contact Detective Jim Wijnhamer at (909) 866-0100, Detective Lance Stuart at (909) 890-4840, or Cal Fire Captain Jack Markle at (909) 881-6922.Information can also be reported anonymously by calling WE-TIP at (800) 78-CRIME or online at www.wetip.com.