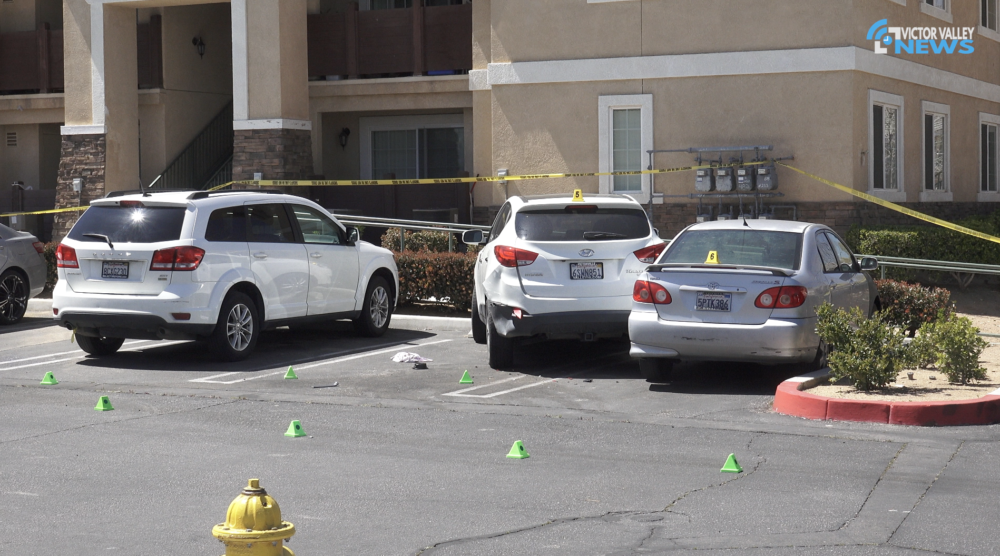 HESPERIA, Calif. (VVNG.com) — Authorities arrested a Hesperia man for murder after allegedly running over the victim multiple times with his minivan, officials said.

Victor Valley News first reported on the murder investigation that was taking place at the Sunrise Terrace Apartments in the 16500 block of Muscatel Street in Hesperia on Wednesday afternoon.

According to new details, deputies responded to the apartment complex at about 6:54 am, on April 1st after receiving several calls of a man being run over multiple times by a man in a minivan.

When police arrived they found the victim, Reo Moore, 57, a year-old resident of Hesperia, unresponsive. He was rushed to a local hospital where he was pronounced deceased.

The suspect had fled the scene prior to deputies arriving.

Several of the vehicles in the parking lot of the apartment complex were crashed into by the suspect as he killed the victim.

The suspect, later identified as 41-year-old Terrance Bright, had fled the area before deputies arrived.

“Dispatch received a call of an attempted carjacking at a gas station on Main Street and the suspect and vehicle description matched that of Terrance Bright and the minivan,” stated sheriff’s officials in a news release. “Responding deputies located the van traveling west on Main Street and initiated a traffic stop.”

Bright failed to yield and entered the northbound I-15 freeway. Several minutes later, near Roy Rogers Drive, he stopped and was detained without incident, officials said.

Detectives from the Specialized Investigations Division – Homicide Detail responded and are conducting the investigation.

According to the release, “detectives learned that early Wednesday morning Terrance Bright argued with his brother and stole his brother’s minivan. Bright then went to Reo Moore’s home where they argued and got into a physical fight. Moore was able to run from the apartment and into the parking area where Bright got into the stolen minivan and struck Moore multiple times with the vehicle.”

Terrance Bright was arrested for Murder and booked at West Valley Detention Center where he is being held without bail.

The investigation is ongoing and anyone with information, or anyone who witnessed the incident, is asked to contact Detective Floyd Stone, Specialized Investigations Division – Homicide Detail at (909)387-3589. Callers can remain anonymous and contact WeTip at 800-78CRIME or www.wetip.com.