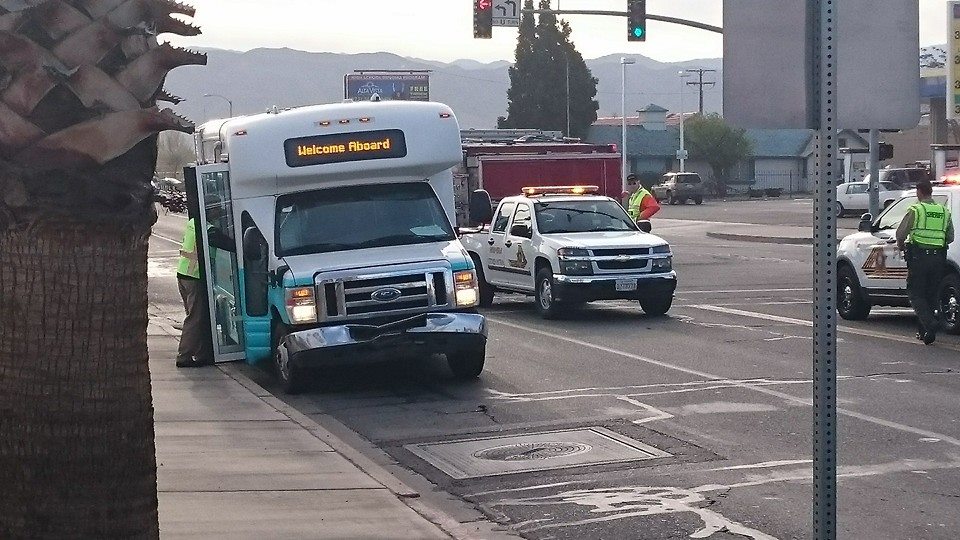 HESPERIA:(VVNG.com)- A Victor Valley Transit Authority (VVTA) city bus was involved in a traffic collision with a vehicle near the intersection of Main Street and 3rd Avenue at approximately 8:25 A.M., on Tuesday, March 17, 2015.

A male driver of an older model four door Toyota sedan was trapped in the vehicle and required a minor extrication. The unidentified male described as being in his 50’s was airlifted to Arrowhead Regional Medical Center for minor injuries.

The bus was occupied by several passengers at the time of the accident. According to public information officer Karen Hunt, the occupants on the bus did not sustain any injuries.

According to authorities, the VVTA bus was traveling westbound on Main Street and reportedly ran the red light colliding into to Toyota traveling southbound on Third Avenue.

Westbound traffic on Main Street was detoured for a couple of hours while the accident was cleared from the roadway.

At this time the cause of the accident is under investigation by the Hesperia Sheriff’s Station.