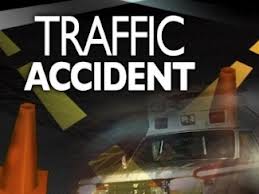 PHELAN:(VVNG.com)- On Wednesday, October 15, 2014 at 4:57 p.m., a major injury two-vehicle traffic collision was reported on the 9200 block of Beekley Road near Nielson Road.

Per CHP incident logs, a Toyota and a large pick up truck hauling a travel trailer collided. One person was trapped and required extrication. According to scanner traffic, it took firefighters approximately 30 minutes to extricate the person from the vehicle.

The vehicle collided into a nearby telephone pole belonging to Verizon and knocked it down causing the lines to land in the roadway.

An airship was requested to transport the injured patient but was later cancelled and the patient was transported by ground ambulance to Desert Valley. The condition of the person injured in the accident is currently unknown. According to unconfirmed reports, the person trapped in the vehicle sustained life threatening injuries.

At this time the exact cause of the accident is under investigation. More details will be updated as information is made available.