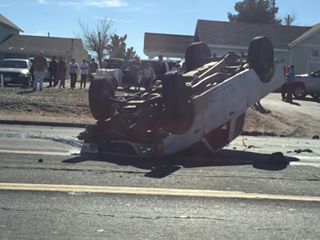 HESPERIA-(VVNG.com): At approximately 12:23 p.m. on Saturday, January 17th a report of a traffic collision which included a vehicle rollover was reported in the area of Main Street east of Escondido and west of Pyrite Street.

The two vehicle collision occurred as the two vehicles were heading eastbound on Main street. One vehicle slowed to turn into the Valentino’s Pizza parking lot when for unknown reasons, they were rear ended by a Ford Ranger pick-up truck causing the truck to overturn.

Eastbound traffic was closed from Main street to Pyrite Avenue from approximately 12:30 p.m. causing major traffic delays from those traveling Eastbound. At approximately 1:30 p.m. the road was re-opened to traffic.

There were minor injuries reported to occupants of the truck, due to the collision, the patients were taken to Desert Valley Hospital for treatment of their injuries.

For the latest local news in real-time be sure to join our Facebook group with over 52,000 members www.facebook.com/groups/victorvalleynews