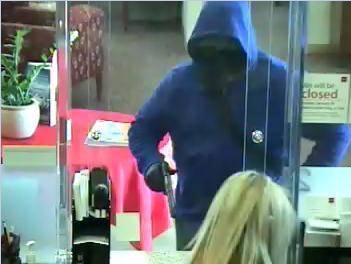 Following a bank robbery on Wednesday, 1/8/14 in the city of Corona, law enforcement has linked a suspect known as the “Luger Bandit” to a sixth bank, five of which were robbed and one where an attempted robbery occurred.

Law enforcement agencies in Los Angeles County, San Bernardino County, and Riverside County are seeking the public’s assistance in order to identify and determine the whereabouts of the Luger Bandit.

Two of the banks that were victimized are offering a combined reward of up to $15,000 for information leading to the arrest and conviction of the suspect.*

The suspect was described by witnesses as a white or Hispanic male, approximately 30-40 years in age; between 5’8” and 6” in height; and approximately 200 lbs.

During each robbery, the suspect orders employees and customers to the ground, brandishes a weapon and demands cash in various denominations. The suspect’s weapon has been described as silver in color and resembling a German Luger-style weapon. During a recent robbery, the Luger Bandit entered the Wells Fargo Bank at 11764 Depalma Road in Corona and demanded cash while brandishing a weapon.

In previous robberies, witnesses have described the suspect’s vehicle as a charcoal gray BMW, 3-series with a sports package.

The suspect can be seen in bank surveillance photos wearing pullover sweatshirts with hoods and jeans, as well as a facemask, sunglasses and black gloves to conceal his appearance. The suspect is also carrying a black bag with a strap during the robberies.

The Luger Bandit has been linked to the following robberies:

Bank surveillance photographs are being released publicly in order to identify the suspect. Anyone with information as to the identity or the whereabouts of the unidentified suspect known as the Luger Bandit is urged to contact the FBI or dial 911. In Los Angeles, the FBI can be reached 24 hours a day at 1888 CANT HIDE (888 226-8443)

Anyone with information about the identity or whereabouts of either suspect is urged to contact their nearest FBI office, sheriff’s or police station, or dial 911. Or if you wish to remain Anonymous, call “LA Crime Stoppers” by dialing 800-222-TIPS (8477), texting the letters TIPLA plus your tip to CRIMES (274637), or using the website https://lacrimestoppers.org/