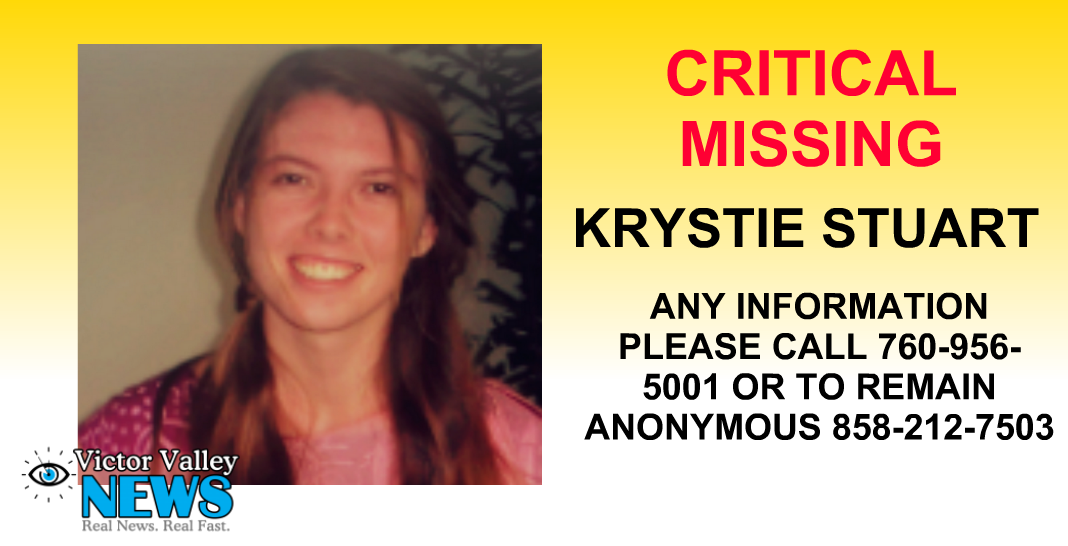 APPLE VALLEY-(VVNG.com): Nearly seven months after her daughter’s disappearance, Virginia (Ginger) Stewart says she believes that someone has to be withholding information that may help lead them to her daughter’s whereabouts.

The heart wrenching case that captured the hearts and thoughts of the Victor Valley community has went from a voluntary missing person, because of Krystie Stuart’s age, to a critical missing person.

The case is now, due to the time elapsed and unusual circumstances surrounding it, a criminal investigation being headed by the San Bernardino County Sheriff’s Homicide Detectives.

On Tuesday, March 3rd Krystie left her Lucerne Valley home, where she lived with her parents to go to a dental appointment in Apple Valley. The staff at the dental office reported to last to see her after her appointment at about 4:20 p.m. that evening.

The dental office staff said that Krystie was upset when leaving because she was unable to be treated due to a pre-existing medical condition. Following her appointment Krystie also planned on visiting a close friend of hers. When leaving, she was unable to find the keys to her truck and the staff at the dental office helped her look for them, but eventually she was believed to have used her spare key to leave.

According to her mother, her friend received a call saying that she was on her way, but she never showed up. Krystie’s mother was concerned about her daughter due to her history with depression and her recently

Virginia told a Victor Valley News reporter in March that soon after the doctor helped to wean her off of the medication she noticed a decline in Krystie’s mood.

Virginia says that because they feel that information is being hidden she needs those hiding it to know that what they are doing is not only a criminal offense, but has turned the lives of those who love Krystie upside down. “The entire family is suffering tremendously without the knowledge as to what has happened to Krystie,” she said. She believes more than one person knows what happened and where Krystie is.

On Sunday, March 10th Krystie’s truck was recovered in a desolate area in the town of Apple Valley. On a recent Victor Valley News post reaching out to the community Virginia Stewart said, “The way her truck was found and the location indicates it took two people to have dumped it. One to drive it out there, and another car to follow to pick up the driver of the truck.”

Krystie is 5’8, about 107 pounds, she has waist length brown hair, brown eyes, and wears glasses.

If anyone has any information about her whereabouts or has any information regarding her disappearance they are urged to call the San Bernardino County Sheriff’s Dispatch at (760)956-5001. If you would like to remain anonymous you can call in a tip to 858-212-7503 or you can email helpfindkrystiestuart@gmail.com.