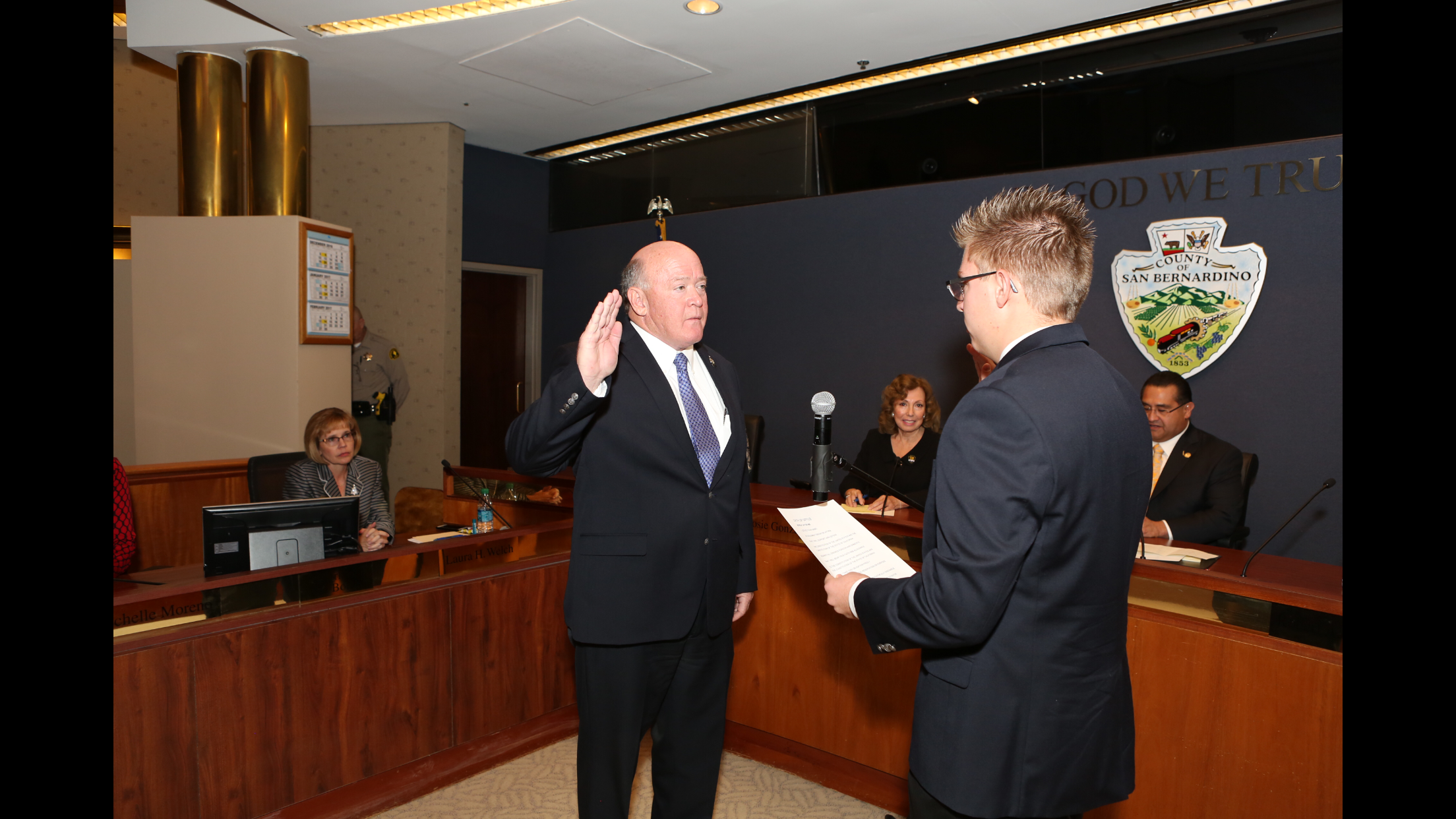 San Bernardino County Board of Supervisors Vice Chair Robert A. Lovingood was sworn into office Monday for his second term as First District Supervisor and underscored his desire to further strengthen law enforcement and public-private partnerships.

After his son Jedidiah Lovingood administered the oath of office, Vice Chair Lovingood said the future holds both opportunities and challenges. He said strengthening law enforcement must continue to be a top priority.

“The partnerships that I see and the things I envision in the future are strengthening public safety,” Lovingood said. “Within the First District, we’ve done that and will continue to do that. Because people who make investments and companies will come where they feel safe. People aren’t going to make investments where they don’t. And that’s a critical issue.”

During his first term, Lovingood consistently allocated County funds for “Operation Desert Guardian,” series of summertime crime sweeps across the High Desert – crackdowns that otherwise would not have occurred.

Without raising taxes, Lovingood hopes to increase funding for the Sheriff’s Department to add additional deputies. In his first term, he supported Sheriff John McMahon’s plan to add 25 additional deputies to unincorporated areas without increasing taxes.

With the economy and revenues improving, Lovingood said priorities include increasing efficiency and improving infrastructure.

Lovingood said. “I believe we’ve come through a tough time economically. I know we’re going to have some challenges. I look at what’s going to happen with how health care is going to be impacted and some noted changes were are seeing on the national level. But I see this great team of folks that want to continue to look out and adopt best practices with, find out how we can improve and get better and be better stewards of our dollars.”

“I look at infrastructure and the world of the three P’s – public-private partnerships and where that is going to guide us and the opportunities. It will be a challenge to keep up with infrastructure repair throughout the state.”

The Supervisor also said that improving technical training for local workers will make the region more attractive to manufacturers.

Demographic shifts in employment in next decade will present challenges and opportunities that must be prepared for now.

“Technical training has been something … that we’re looking at,” he said. “We are going to have so much opportunity to create living wage jobs for our population. I am fully committed to that and working with education and have that expanded.”

Lovingood was elected in November 2012 and again in November 2016 to the San Bernardino County Board of Supervisors, representing the First District. With a career in business, Supervisor Lovingood has worked to bring greater accountability and a more business-friendly approach to County government. He has reached out to the local business community to hear – and then address – some of their most pressing issues.

The key to Supervisor Lovingood’s economic philosophy is that communities thrive when businesses create jobs and people have more money to spend in the local economy. When government interferes with higher taxes, fees and more regulations, the golden goose either dies or flies away.

In the past, members of the Board of Supervisors often operated in “silos” and ignored important infrastructure needs. While Supervisor Lovingood is a strong advocate for his High Desert constituents, he recognizes the need to work with his fellow Supervisors for the good of the entire County.