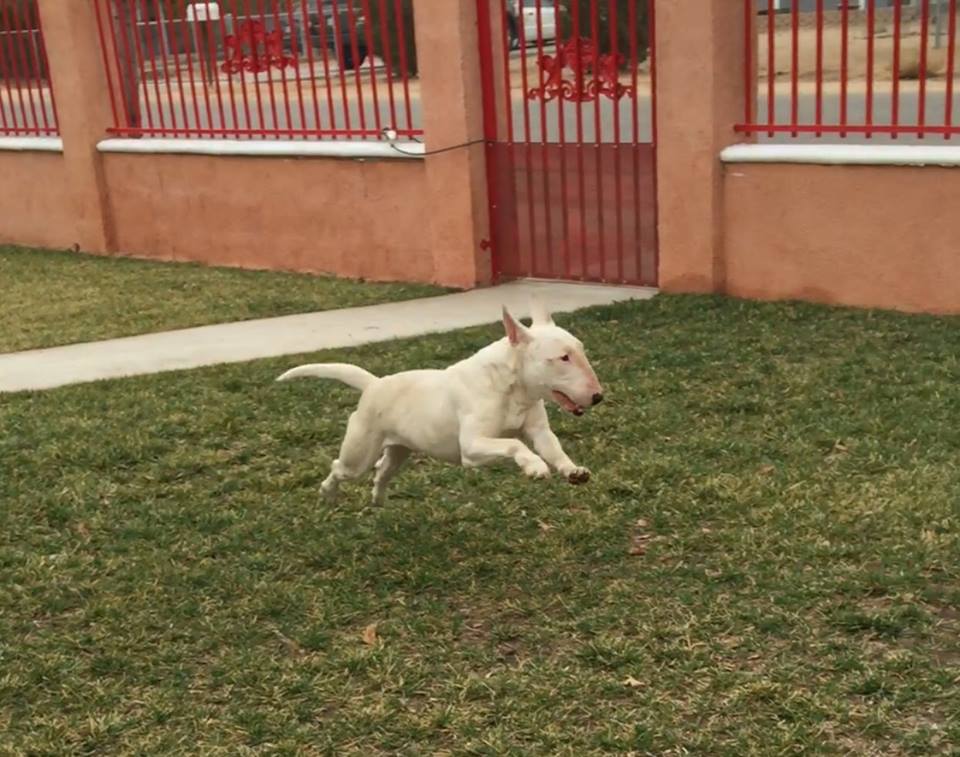 APPLE VALLEY-(VVNG.com):  An Apple Valley woman got a huge surprise when she received a call on January 8th. The call was from the Apple Valley Animal Shelter letting her know that someone had turned in a pet with a microchip that had her information on it.  She almost could not believe when she found out it was her Bull Terrier Blanca that went missing from Wilmington, CA, over 100 miles away in 2012!

“We never stopped looking for her, every time we would go downtown we would visit shelters to see if she was there and we would search around the area she went missing,” said owner Yuleni Olea. Blanca was 6-months-old when Olea adopted her and she came with the microchip that helped get her home.

The day Blanca went missing the family had went out to get lunch, they left Blanca in Olea’s parents fenced backyard. When they got back about an hour later, they went out to play with her and she was gone. At the time she went missing she was three years old.  The family went back home to Apple Valley, but they felt a piece of their heart, a part of their family was left in Wilmington.  “There were no clues as to where she went,” said Olea.

“I cried my eyes out when I saw her come out that door, I was just overjoyed we finally have her and I’m sure that if she could speak she would tell me all she has lived these past two years. I would listen to every single detail.”

Blanca when picked up at the Apple Valley Animal Shelter.

According to Olea, a woman from Rialto contacted her to explain to her that her husband found Blanca and could not keep her so he gave her to his cousin. His cousin took her to get checked for a microchip and after finding out she had one he let her go, fearing he would be blamed for stealing her. A Victor Valley area woman found her on Highway 18, gave her water and turned her into the shelter where she was scanned and returned to the loving arms of her owners.

Many wonder if Blanca remembers her owners, Olea feels she does.  “I feel she recognized me, as tears were running down my face she would lick my face, but I have a feeling we might need some time to reconnect,” said Olea.

Italian researchers conducted a study at the University of Padua, which concluded that dogs rely on their eyes to discern their masters. Even more than smell, a dog uses his sense of sight to determine who you are. So long as your dog has strong healthy eyes, he won’t forget you.

[box type=”info” align=”aligncenter” ]Every year numerous lost pets are found and turned into area animal shelters, since pets often times have no identification there is no way to locate their owners. Microchipping is low cost, usually about $20 and can be done at most veterinary clinics as well as some shelters. The owner must remember to update it if the address or phone number information changes. A microchip is small, about the size of a grain of rice, insertion is painless and permanent. Any type of animal can be chipped, but also remember to keep the pet wearing their ID tags since it will improve the chances of your loved one getting back into you in the case of being lost.[/box]