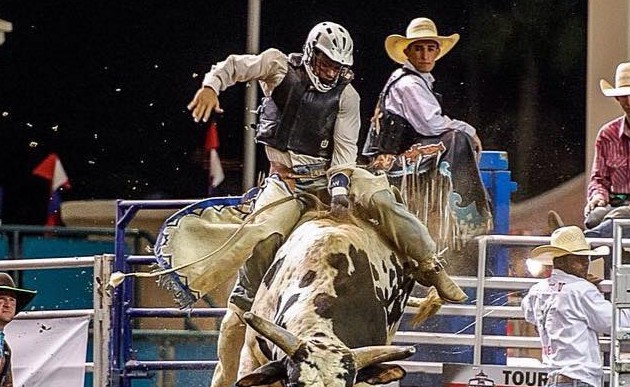 (VVNG.com)- Jordan Wilson is a 27-year-old bull rider and Victor Valley resident looking to propel his career to the next level in the increasingly popular sport of bull-riding.

Jordan recently entered a contest for a new CBS reality TV show called, Bucking Madness, and hopes he will make it onto the show. He’s been very busy networking all over social media, rallying friends and family, and reaching out to his community for votes. “Winning this contest would be a dream come true,” says Jordan.

His love for competition and extreme sports began at a very young age.

He began playing team sports at the age of 8 and has been involved in athletic competition ever since. He attended Lucerne Valley High School and played football, baseball, basketball and ran track. He played three years at the varsity level in football and baseball. He was awarded MVP his freshman year, team captain and first team all league running back both junior and senior year in football.

All while maintaining good grades, a part-time job at a local feed store and being an active member in the FFA.

His dedication, desire to succeed and become the best in every aspect of life has been of utmost importance to him from the time he was a small child. His passion for the sport of rodeo and the western way of life has been largely influenced by his grandfather who raised and trained his own race horses was a saddle bronc rider and trick roper.

Since beginning this passion led journey he has been sure to take advantage of every available opportunity to continuously improve his riding. His knowledge and skill level has increased significantly due to inspirational and motivating trainings. Among the most notable is his attendance of World Champion, Gary Leffew’s, bull riding school numerous times.

Jordan also currently runs both World Gym’s here in Victorville and attributes a lot of his success and ability to market himself, the sport of rodeo and bull riding in a positive and effective manner to the experiences and achievements he and the rest of his team have accomplished over the years. He says that the basic concepts of bull riding can be applied to just about any life situation.

His sales techniques are slightly different, in that he requires each team member to figure out and understand what they truly want out of life and apply that same passion each and every day. Their continuous positive attitude, hard work and enthusiasm has been a major motivation for him to continue his own passion in life.

Jordan is asking his community to help him win this contest. Voting is very easy and each person can vote up to 5x a day. The contest ends on July 30th. If you want to help Jordan achieve his dream, click on the link and vote: Jordan Wilson Bucking Madness