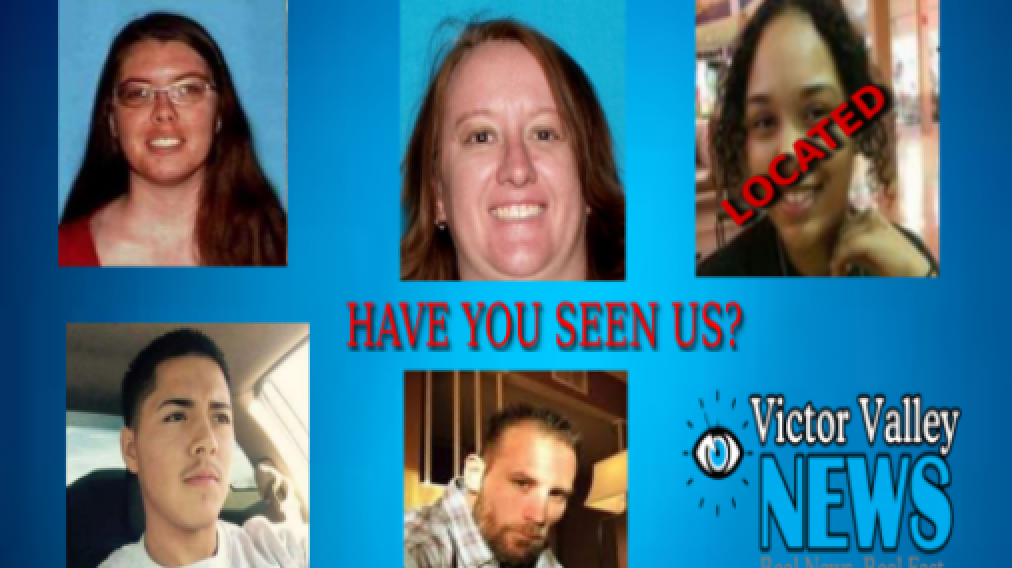 HIGH DESERT, CA. -(VVNG.com):  The High Desert is known for star filled skies, beautiful sunsets and sunrises, Joshua Trees and so much more. Lately, we have also have had a rash of both missing and/or runaway residents, some who have been gone for an extended period of time.

The community has remained vigilant in sharing missing person flyers, articles and watching for people matching descriptions, but these people are still yet to be found. Clues for some came early on but since have been sparse. Victor Valley News would like to keep the faces of these missing people in the spotlight to better the chances of helping to get them home safe with the family that loves them.

Over a year ago, on March 3, 2015 Krystie Stuart went missing and although she suffered from an untreated mental illness, law enforcement was left with little choice but to consider her voluntary missing for days that may have been essential for her quick return home. Krystie, a Lucerne Valley resident was 29 years old when she went missing.

Krystie went to a dentist appointment at Jess Ranch Dental, she was upset that they were unable to perform the treatment she went for due to a pre-existing medical condition. The staff at the dental office said that she misplaced her keys in the office and she left using a spare key. Her mother, Virginia Stuart said that her daughter has dealt with depression and asked her doctor to help wean her off of her medication, which he did.

Virginia said that her daughter’s moods declined prior to her going missing. Less than a week after going missing, on March 8th her white truck was located in a desert area of Apple Valley. Virginia and other family members have expressed their deep love and concern for Krystie, continuing to share articles and flyers in hopes that someone may see her. Now over a year later Ginger Stuart said, “Our Grief is frozen as we do not have the answers to what has happened to our daughter Krystie Stuart and we do know someone out there holds the truth and needs to do some serious soul searching.”

Krystie is 5’8”, 107 pounds, she has very long light brown hair, her hair is usually braided and is longer than waist length. If anyone has any information about her whereabouts or has any information regarding her disappearance they are urged to call the San Bernardino County Sheriff’s Dispatch at (760)956-5001. If you would like to remain anonymous you can call in a tip to 858-212-7503 or you can email helpfindkrystiestuart@gmail.com.

There is still no word about missing person, 38-year-old Allan “Rick Godfrey. Godfrey was last seen on April 17, 2015, from 10450 Wilson Ranch Road following an altercation. He was last seen leaving the location on foot and has not been seen or heard from since he left that day.

Godfrey is described as a white male, 6 feet 4 inches tall, 150 pounds, and he has brown hair and eyes.

Daniel Gallardo, 19 is a young Barstow man that went missing on Thursday, October 29, 2015. Gallardo expressed the desire to find a job and met with a family member in Reno, Nevada. The following morning the two went to Truckee, Ca. for possible employment. Daniel was hired and expected to go to work the following day, but he did not show up and no one has heard from him since.

The third missing person, is Silverado High School teacher 34-year-old Christina Bastain. Christina went missing on Sunday, November 1st after leaving her friends home at about 1:30 a.m. She left with her dog, Coco and several belongings that she was storing in her truck. Christina’s mother, Cheryl Denny said that her daughter suffers from Bipolar Disorder and with the help of her doctor was recently weaned off of medication. She is uncertain of what may have happened, but thinks her daughter may have had a breakdown after a recent attempted break in at her Apple Valley home.

The day following her disappearance, her vehicle and several of her belongings were located in two locations, her truck in Highway 62 in Morongo Valley and her belongings in the Lucerne Valley area. On November 11th a backpack with several more belongings were located in Apple Valley 1 mile north of Bear Valley and Central Road. Her tiny tan and white Maltipoo was yet another missing piece to the puzzle that family hoped would lead to Bastain. Although Coco, the missing teacher’s dog was found on November 1st, Denny was not made aware of the finding until Monday, November 23rd, when a friend located the found dog post on a local lost and found pet website.

Bastain’s mother, Cheryl Denny said on the Help Find Christina Bastain Facebook page,”Christina, I miss you so much. I will never stop praying for you and searching for you.”

Bastian is described as 5’6”, 170-180 pounds, she has brown eyes and strawberry blonde hair. The vehicle she was last seen driving was her Silver Dodge Ram 1500. Anyone with information on Bastian’s whereabouts or any information that may help locate her is asked to contact the Apple Valley Police Department at 760-240-7400.

If you have a friend or family member from the High Desert area that is missing, please email news@vvng.com.