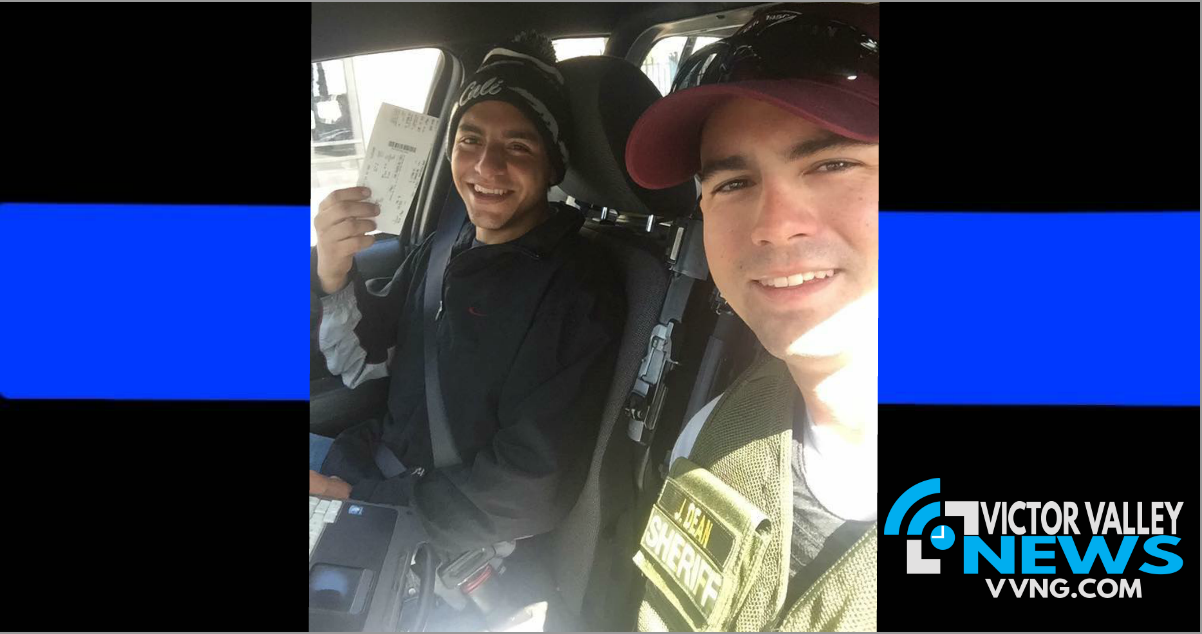 VICTORVILLE, Calif. (VVNG.com) When a young man named Jake went into the Victorville Police Department to file a police report, he wasn’t anticipating the kindness he was about to receive from a local deputy.

Jeffrey Dean, a San Bernardino County Sheriff’s Deputy who has worked for the Victorville Police Department for three years was assigned to take Jake’s report that Saturday.

Jake had been out in Victorville working when he was beaten up and robbed by three men. He had his cell phone, wallet and money taken from him and was hesitant about filing a report, but decided to anyways.

After Deputy Dean realized that Jake had no place to stay and no money for food, Dean decided to pay for Jake’s motel room for the night and dinner to make sure he ate.

Dean’s kindness didn’t stop there. Jake’s soon to be stepfather Scott Davis explains what happened next through a post he shared on his Facebook page.

“My soon to be stepson was working in Victorville, Ca. when he was Jumped by 3 guys and robbed. They beat him and took his wallet and cell phone. When Jake could he went to the police station for help (this kid don’t like police) so that’s how bad it was,” Davis wrote.

“By the hand of God, he found officer Jeffrey Dean of the San Bernardino County Sheriff’s Department. This Officer called us to see if we could help get Jake out of Victorville because it’s such a bad place in his words, “He won’t survive a night on the streets,” Davis shared.

“He told us a Greyhound was leaving in 15 minutes (and if we) could get a ticket for Jake. Unfortunately, because time was so short we could not. So we made arrangements to get him on the bus the next day,” Davis wrote.

This is where the family says the story ‘get’s good.’ Not only did Deputy Dean pay for a motel room and dinner for Jake out of his own pocket, he also put his Mother’s Day plans on hold to ensure Jake made it to the bus station.

“As luck would have it, the Western Union at Albertsons doesn’t open until 10 am on Sunday, so we couldn’t send money for the ticket. Officer Dean paid for the ticket out of his own pocket with only a promise that we would send the money,” stated Davis.

Needless to say, Jake’s outlook on law enforcement changed dramatically after he encountered the kindness and heart-felt compassion from Deputy Jeffrey Dean.

Dean’s girlfriend Sarah Elizabeth said she cried when she heard the story because she is so proud of the person Jeff is, his accomplishments with his life and the Sheriff’s Department and his dedication to serving the community.

“Jeff has a heart of gold and could have easily turned the other cheek to respond to a “better call”. While our officers surely don’t do their job and put their life on the line each day for the fame and recognition, it’s always amazing to hear these types of stories that make you believe again in the kindness of the world, and more importantly in our desert!” Sarah said.

“I just pray people don’t give up on our first responders and lose sight that he or she truly wants to protect and serve their communities and that there’s still great ones out there!”