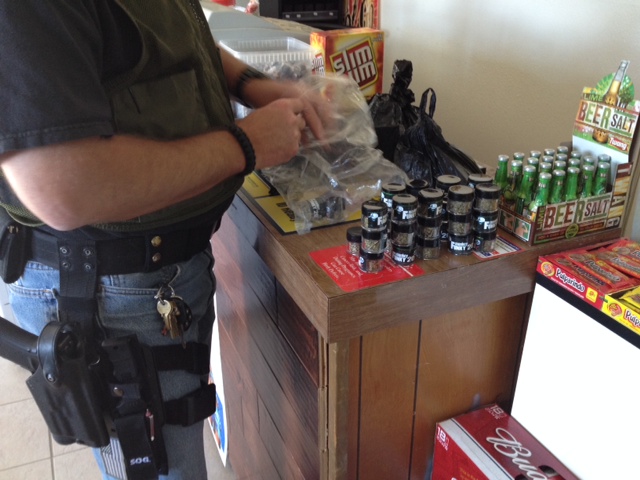 [googlemap src=”” align=”alignright” ]VICTORVILLE: On April 28, 2014 a San Bernardino County Sheriff’s Department narcotics team, specializing in the enforcement of synthetic drugs, seized 123 packages of the illicit substance from a liquor store in Victorville after receiving information from the community that the substance commonly referred to as “spice” was being sold there.

Members of the narcotics team served a search warrant on JP’s Liquor Store and Amargosa Smoke Shop and Mini Mart located at 14477 Amargosa Road, Victorville. Various packets of the product, labeled Funky Monkey, Joker, Diablo and Scooby Snacks, were not on display at the store but carefully stored out of sight. Detectives found the synthetic drug product hidden under the kick board of a liquor display shelf. A hollow space behind the metal panel at the bottom of the liquor shelf contained bags of the illicit product, which was found in various, brightly-labeled containers and packages.

In total, the team seized 123 packets from both businesses, which are side by side in the strip mall. The packages contained cartoon characters, such as Scooby Doo or the Superman logo, and were labeled with bright colors to appeal to the youth. Packets of spice were sold from $8, for 3 grams, to $40 for larger quantities. A report was taken and will be forwarded to the District Attorney’s Office for review for prosecution. Jarjour, Wasef, male, 43 and Paratas, Mirachu, female, 42 were both listed as suspects suspected of selling synthetic narcotics.

In October, a designated Sheriff’s Department task force, aimed at the eradication of dangerous synthetic drugs, served warning letters to area businesses advising them the sale of “bath salts” or “spice” – as they are commonly called – is not permitted in the county. The department has worked closely with members of the community to ensure proactive enforcement of the sales of synthetic drugs. The above location was discovered because of a tip from residents in the Victorville area.

“Spice” and “bath salts” – also known as “designer drugs” – have been scientifically formulated to create the same effects of more common drugs, such as marijuana, methamphetamine or PCP. But these “fake” substances are not detected on standard drug tests because they are a synthetic imitation. For this reason, abuse tends to run rampant in the military and other professions in which drug testing is a common occurrence.

Spice is a mixture of herbs sprayed with the synthetic chemicals that is usually smoked. Bath salts are synthetic chemicals in a powder or crystal form that are usually snorted or injected. These highly addictive, synthetic drugs are marketed as potpourri, decorative sand, shoe deodorizers or glass cleaner; however they have nothing in common with the products they are advertised to be.

One of the most common effects of these drugs is homicidal and suicidal tendencies, making them extremely dangerous for law enforcement officials who are called to respond to those who may be under the influence of spice or bath salts.

The effects of these synthetic, or “designer” drugs, range greatly because there is no prescribed dosage on any of the packages. Users have been known to suffer cardiac arrest, brain seizures, tremors, and excited delirium. Others have extraordinary strength, similar to the effects associated with the use of PCP, making the Taser and other force options ineffective. While producers of bath salts promise a euphoric high, similar to cocaine or methamphetamine, the psychotic results of the synthetic drugs are far more severe and addictive. 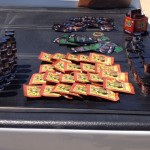 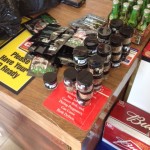 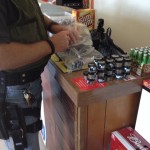 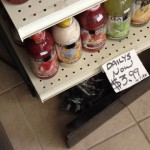