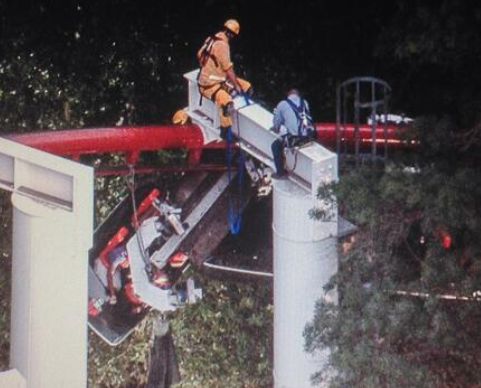 (VVNG.com)- On Monday, July 7th a terrifying accident just before 6:00 p.m. at Six Flags Magic Mountain Amusement Park in the city of Valencia left 22 thrill-seekers hanging approximately 40 feet above the ground. Riders were left facing the ground at a 45 degree angle for almost three hours while the urban search and rescue team prepared for and conducted the challenging rescue.

Four injuries were reported due to the a large pine tree branch falling on the tracks of the Ninja, roller coaster derailing it from the tracks. The riders were safely

evacuated from the roller coaster at about 8:30 p.m. Most the riders were rescued with just some nerves rattled while two riders were transported for treatment of minor injuries, including knee pain, back pain and head injuries

Witnesses reported hearing the ride crash into nearby trees followed by screams. The 55 mile per hour Magic Mountain Ninja Ride was introduced to the public in 1988. Magic Mountain officials said that the ride will remain closed until inspectors can survey the tracks and the area surrounding the ride.

On Thursday, July 10th, just three days after the accident,  two of the riders who suffered head injuries filed a lawsuit against Six Flags Magic Mountain. Jeremy Ead and Olivia Feldman are seeking unspecified damages for the injuries that they sustained due to the derailment.

Attorneys for the two questioned why the 25-year-old Ninja roller coaster was built around all the trees, implying negligence. Ead and Feldman are seeking reimbursement for all past and future loss of wages, medical expenses and emotional distress. The lawsuit did not specify an amount the accident victims are seeking.

After an investigation, Cal/OSHA investigators determined that the first car hit the tree with it’s front wheel subsequently causing the tree branch to slam into the front right corner of the first car and the sixth car. The roller coaster went about 30 additional feet prior to coming to a stop.