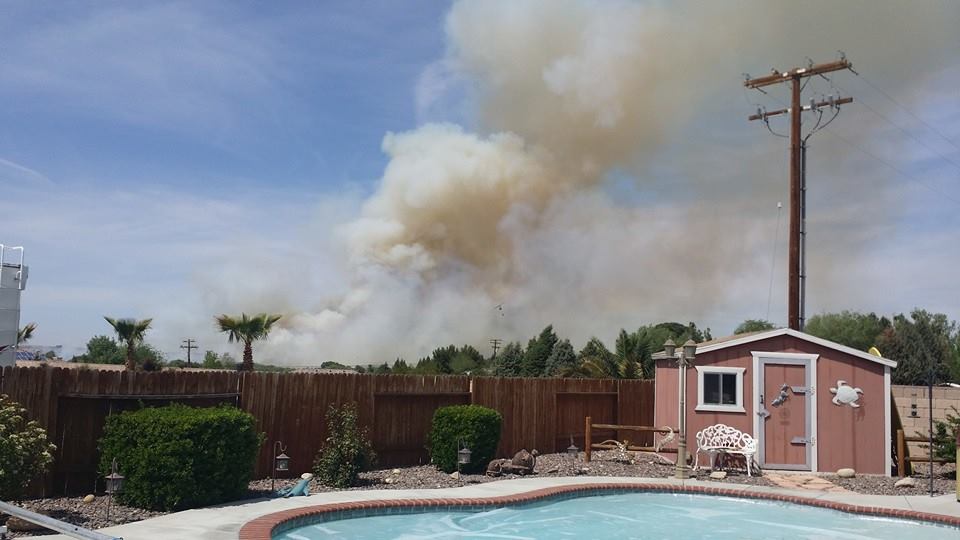 UPDATE @ 4:15 P.M.– Fire at 70 acres. Multiple strike teams, two water-dropping helicopters and 200 personnel assigned to the incident. Shelter is open at Sitting Bull, with a Red Cross team reporting, but no one has reported for sheltering yet, so there is no need for volunteers. Animals can be evacuated directly to the animal shelter at 22131 Powhatan Road.

UPDATE @ 2:20 P.M.– Winds in the area are reported to be getting stronger. Mandatory evacuations have been ordered for homes close to the fire on the Apple Valley Side. And several animals have also been evacuated. The National Weather Service has issued a wind advisory for the Town of Apple Valley starting today at 4:00 PM to 4/1/2015 3:00:00 AM.

VICTORVILLE:(VVNG.com)- Residents all over the Victor Valley started reporting heavy smoke coming from the river bottom just before 11:00 A.M., on Tuesday, March 31, 2015.

What started off as a permitted fire has quickly turned into a multi acre uncontrolled fire burning at the Mojave Narrows Regional Park named the “River Bottom fire”.

Per scanner traffic, 60 acres of heavy vegetation have burned. Mandatory evacuations to nearby homes on Seneca and Riverside Drive have been requested.

Due to strong gusty winds additional hand crews have been requested. A water dropping helicopter was also seen assisting in the fire fighting efforts. A command post has been established at the front entrance of Mojave Narrows near Yates Road. CHP is on-scene assisting with traffic control.

For more photos and real-time updates be sure to join our FB group Victor Valley News.