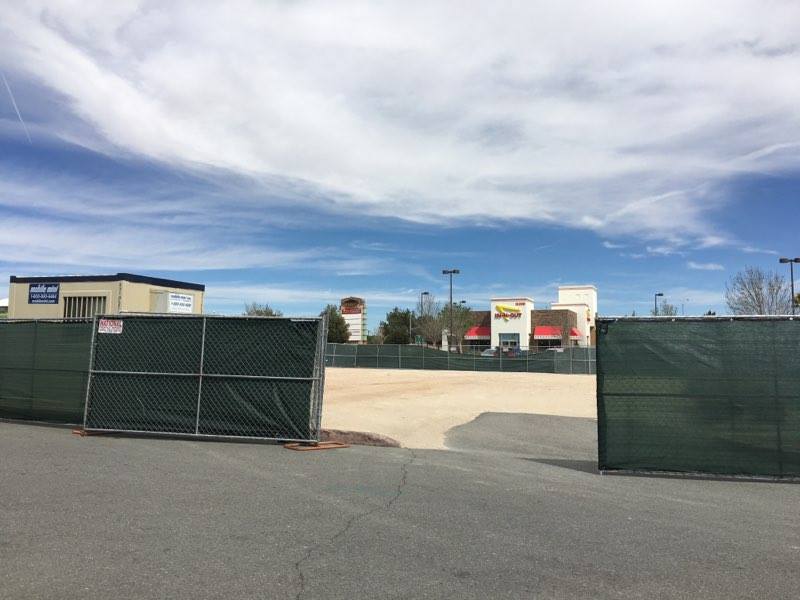 VICTORVILLE-(VVNG.com): The first Krispy Kreme Doughnuts in the Victor Valley is set to break ground very soon, and has a sweet surprise in store for those late night snackers.

First signs of movement occurred today when fencing was placed around the lot where the 3,050 square foot building will sit near the In-N-Out Burger on 15200 block of Civic Drive, in the Desert Sky Plaza located just west of I-15 Freeway. The news was confirmed on Wednesday by Victorville Director of Development Chris Borchert, who told Victor Valley News that the developers pulled permits on Monday afternoon and immediately got to work.

“They will put the infrastructure in (plumbing/electrical), while preparing for the floor slab/foundation, then move right into putting the walls up,” said Borchert.

The location is expected to offer a 24-Hour drive-thru which will be open 7 days a week to satisfy your taste buds any time of the day or night. It will also add employment opportunities with up to 10 employees per shift

Since the time Victor Valley News first announced the plans back in August 2015 that the area would have its first Krispy Kreme Doughnut, it was well accepted by the dozens (no pun intended).

“Ahhh…PERFECT! Go to In-n-Out for lunch and then Krispy Kreme for dessert” commented Juanita Downs Vendura.

However, there was some concern raised as to what the new store will do for existing donut shops.

“This is going to hurt the little mom and pop donut shops. I support the little guy not corporations,” stated Michelle Sullivan.

Although the city knows of no set date, Borchert told Victor Valley News that the Victorville Building Official estimates the foundation should only take around 1-2 weeks. With the announcement in August 2015 came with a forecasted opening date for Spring/Summer 2016, which appears to be on schedule.

The next question many residents have now is when the Victor Valley will attract a King Taco or Trader Joe’s.