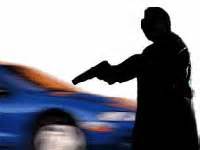 Deputies were able to locate the victim and his vehicle. According to the victim, he was at a gas station in Palmdale when he was approached by one male adult and one female adult. He said the female then brandished a shotgun and told him to get back into his vehicle and drive. The suspects took him to Phelan where they dropped the female off at a residence. The male suspect made him continue to drive away from the residence. After a distance, the suspect told him to stop the vehicle and put it in park. The suspect then got out of the vehicle and walked away.

Deputy Dominic Moody was able to track the suspects shoe tracks approximately 1.5 miles to a residence in the 13700 block of Paramount. Deputies made contact with the subjects at the residence, and after a thorough investigation arrested David Easton and Candace Cantrell for carjacking and kidnapping. The shotgun used in the crime was recovered at the scene.

Anyone with information regarding this investigation is urged to contact. Callers wishing to remain anonymous are urged to call the We-tip Hotline at 1-800-78-CRIME (27463) or you may leave information on the We-Tip Hotline at www.wetip.com.