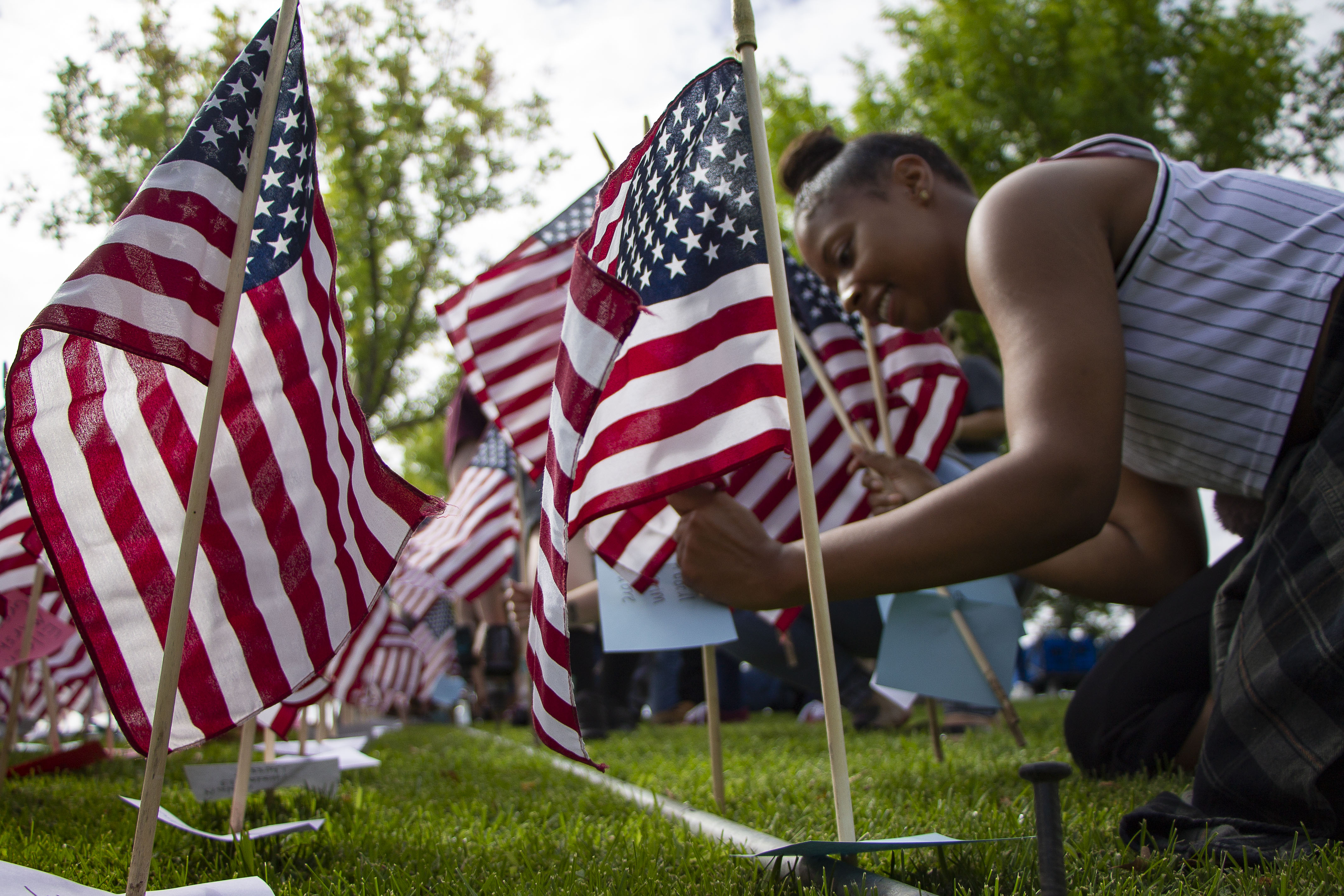 VICTORVILLE — On Labor Day, 3,000 American flags were placed on the hillside beside the Victor Valley College (VVC) Library.

More than 200 students, college staff members and volunteers gathered at 7 a.m. to create the display.

All of the flags have a paper card attached, each one with a different name hand-written on it. They are the names of those who lost their lives during the terrorist attacks on September 11th, 2001.

VVC has maintained this tradition of arranging the Flags of Honor since 2005. This year, the college was honored to have two 9/11 survivors help place the flags.  Both Reggie Cervantes and Charlie Gyles were emergency medical technicians in New York when the attacks occurred. Cervantes, a High Desert resident, has spoken at VVC’s past 9/11 events and donated personal artifacts to the college. She invited Gyles to attend the flag-placing as well as VVC’s Patriot Day ceremony.

“This is amazing — that you keep the memory of the people who we tried to save that day,” Gyles said.

Gyles was an EMS supervisor in 2001 and recalls getting a call from his boss to respond to a plane crash at the World Trade Center.

“We thought it was a Cessna —  a little accident,” he said. “I’m driving down … and we see this plane coming in over the Hudson and it just turned sideways and smashed into the second tower.”

Gyles outran the collapse of the first tower, but unfortunately suffered injuries when the second tower fell. He still suffers flashbacks and carries with him a piece of the North Tower that he grabbed before being taken away in an ambulance.

“We tried to bring everybody home that day,” he said. “Events like this one, that your college is holding, makes it a little easier for responders because you’re keeping the memory of these people alive.”

All of the victims’ names were hand-written by Associated Student Body (ASB) Council members and volunteers over several weeks before the flags were carefully arranged on Labor Day. Volunteers included more than 70 VVC nursing students and 35 fire academy students.

“The flag display commemorates the fallen victims and their families, which we are grateful that we can pay tribute to,” Fire Academy 52 Commander Chris Kohler said. “It was important for the 52nd academy to be a part of this because, as an academy, we truly enjoy serving our community and this was a small gesture that touched many lives.”

The California Nursing Students’ Association (CNSA) of VVC also expressed gratitude for the opportunity to participate in the Flags of Honor tradition.

“Each flag represented someone special. Setting the flags reminds us that we will remain one nation under God, and the coming together of Americans on this day,” said Kathryn Spicer, the ASB Representative for CNSA. “We will never stop striving for unity. We will never stop caring. We will never forget.”

The public is welcome to attend VVC’s annual Patriot Day ceremony on Sept. 11, which will begin promptly at 6:30 a.m. and end at 7 a.m. VVC music faculty member Craig Pridmore will play “Taps” and Music Department chair and vocal music director Dr. Karen Miskell will lead the College Singers in performing two patriotic songs. The ceremony will be held adjacent to the college’s official “United We Stand” monument beside the Library.