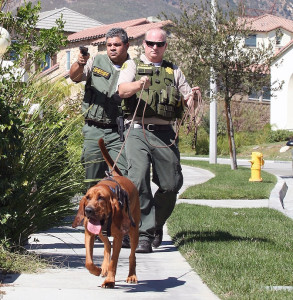 Huerta fled the scene of the crime. During the struggle, a hat Huerta was wearing fell to the ground and was left behind.

Deputy Ryan Girard and his K9 Bloodhound partner “Dare,” responded to the scene. Using the hat as a scent article, Girard used Dare to track the scent. They tracked the scent east from the store to a nearby business complex. The scent continued into an apartment complex near the business complex.

Dare successfully tracked Huerta to the apartment complex where he was located and taken into custody. Because force was used by Huerta during the theft he was booked into West Valley Detention Center for Strong Arm Robbery.