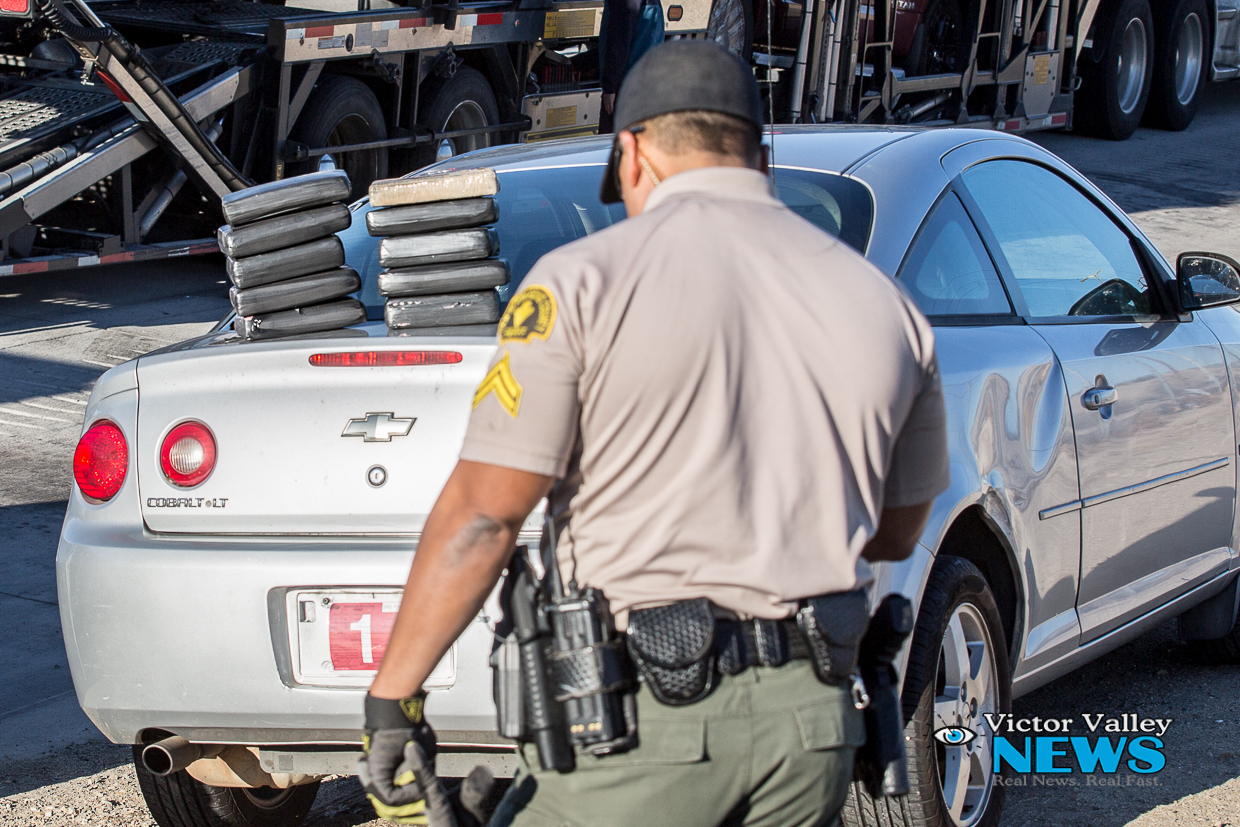 VICTORVILLE, Calif. (VVNG.com) A K-9 with the San Bernardino County Sheriff’s Department sniffed out a possible 10 kilos of presumed narcotics during a traffic stop this afternoon, authorities said.

It was the second large-scale bust this December along the Interstate 15 Freeway that runs through the Victor Valley.

Deputies stopped a cross-country car-hauler this afternoon for a vehicle code violation while traveling north on Interstate 15 through the city of Victorville, about one mile north of the south Stoddard Wells exit.

While the double-deck car hauler was stopped, deputies grew suspicious of a couple of vehicles being hauled.

A drug detection dog was deployed to do a preliminary search of the truck’s load. The 4-legged officer made a positive indication on one of the two vehicles in question.

The vehicle was taken off the truck to be searched, and authorities said they found what is believed to be 10 kilos of narcotics hidden in a silver Chevy Cobalt.

The driver and passenger were questioned and released at the scene, and they were allowed to finish their transport route with the other seven remaining vehicles.

An exact determination of the substance is still pending, but the involved narcotic was believed to be cocaine, according to the supervising deputy at the location, if so, the street value of the drugs are estimated to be worth over $1 million.

“It will have to be tested to confirm the contents of those packages,” said San Bernardino County sheriff’s spokeswoman Jodi Miller.

Earlier this month Franky, a CHP canine officer, and his handler, CHP Officer Robert Mendenhall, made a traffic stop that led to the seizure of millions worth of heroin loaded inside a tractor-trailer on Dec. 1.

In that incident, Mendenhall also was conducting a traffic stop when the drug detection dog was used, and successfully so. That bust was the biggest bust made throughout Mendenhall’s 29-year career as he seized over $11 million worth of heroin that day.

The suspect in the Dec. 1 case, who’s identity has not been released, was arrested for possession and transportation of narcotics.

RELATED ARTICLE: $11 Million Worth Of Heroin Seized In The Victor Valley