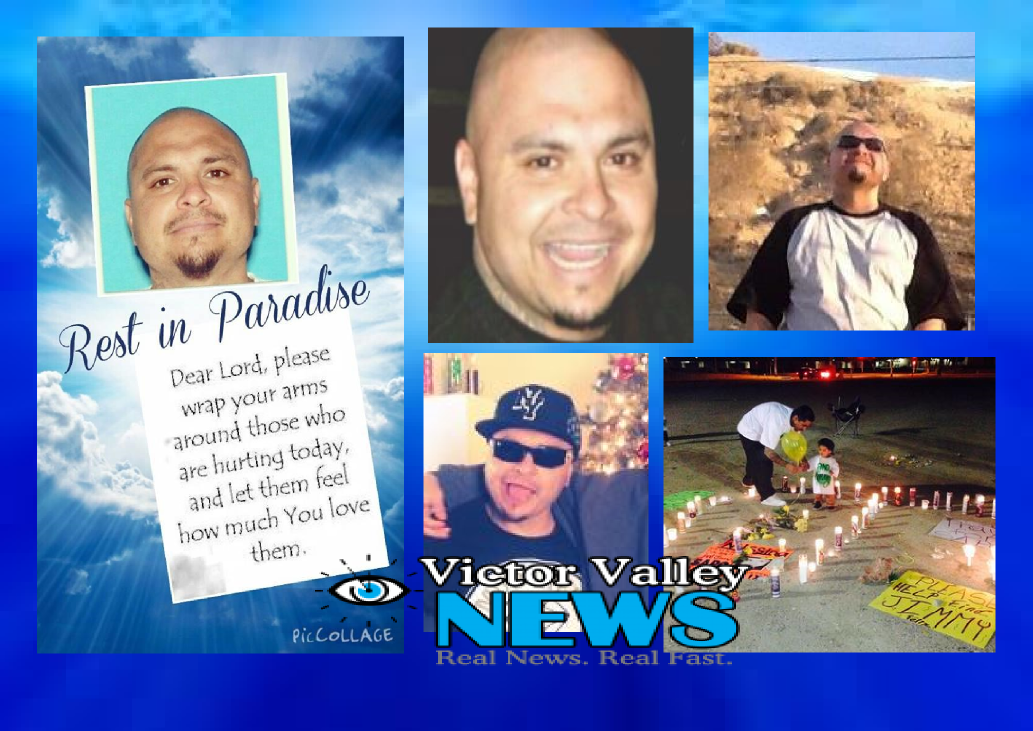 VICTORVILLE-(VVNG.com): On Tuesday March 17th, 2015 just after 9:00 a.m. deputies from the Victorville Police Department took the report that 34-year-old Alberto “Jimmy” Felix had not been seen or heard from since Sunday, March 15th.

Although by the looks of things, it appeared that a Homicide investigation immediately was underway on March 19th the San Bernardino County Sheriff’s Department initiated a missing person’s investigation.

On Wednesday, March 18th, investigators responded to a residence in the 14300 block of Cactus Drive while concerned neighbors watched outside of their homes. That afternoon neighborhood streets were lined with police, homicide detectives, a cement truck and several unmarked vehicles while detectives worked diligently collecting what appeared to be evidence.

Neighbors said that the glove equipped team had been there since the evening of Tuesday, March 17th, first digging in the yard of the home, followed by the investigation of interior of the small single family home.

Sheriff’s officials were unable to confirm whether anything was found during the digging, or what type of evidence they were searching for. All deputies were able to confirm was that, there was in fact some digging in the yard of the home and that there was an investigation that is being handled by the Homicide division.

Investigator questioned neighbors, seeking information that may have been pertinent to the investigation. Many of the neighbors were hesitant to speak, most in fear for their well-being due to alleged verbal threats from the family that lived inside the home in question.

Concerned neighbors who decided to speak with reporters on March 17th stated that most of those who lived in the home on Cactus Street openly spoke of gang ties and avid drug use. The occupants also reportedly threatened multiple neighbors forcing some to move out of the neighborhood due to fear for their family’s well-being.

On March 25th at 7:00 P.M., the family and friends of “Jimmy”, devastated with the fact that their loved one was still missing, set up a prayer vigil praying for his safe return. Although the consensus was split regarding if Felix was missing or if he was deceased nearly 100 individuals came out to support one another and pray together. The attendees vowed to keep the name and face of Felix in the public until they received answers.

After nearly two months following the disappearance of Felix, the Missing Person’s investigation of well-loved Felix shifted into a Murder Investigation.

According to the May 13, 2015 press release the change in the investigation type is due to evidence suggesting that Felix was murdered. Unfortunately, although the Sheriff’s press release notified the public, the family seemed to be unaware in the change

On Monday, May 18th the dehydrated body of a Hispanic male was located in an unincorporated desert area, northwest of Interstate 15 and Wildwash road. Family and friends of Felix shared the news, still hoping and praying that this was not the ending to their two month-long search.

Zachary Barron, 23, of Victorville was arrested in connection with the murder of Alberto Jimmy Felix.

“It is heartbreaking that no matter who this person is that his family is also in a grieving process as we are. Please let the detectives complete their job and I can assure you that the community will know when the family has been told,” commented Frances Felix.

San Bernardino County Sheriff’s Department Spokeswoman Cindy Bachman confirmed on Friday, May 22nd, that the remains were that of another Hispanic male adult whose identity has not yet been determined.

The investigation yielded firm answers to the many questions surrounding the missing man. On Thursday, May 21st investigators served a search warrant on an Apple Valley home.

The investigation led detectives to a desert area in the north west area of Apple Valley where they located a shallow grave with the remains, identified on Friday, May 22nd, as Alberto “Jimmy” Felix. An autopsy will be performed to determine the cause of death.

Zachary Barron, 23, of Victorville was arrested in connection with his murder. He was booked at the High Desert Detention Center and is ineligible for bail. He is scheduled to appear in court on Tuesday, May 26th for an arraignment hearing.

Court records show Barron had four misdemeanor charges that he was still actively fighting  prior to the new murder charge. The active cases Barron was fighting  included two for driving under the influence charges exhibiting a deadly weapon other than a firearm, and criminal threats. He was in court on Wednesday, May 13th for a pretrial hearing where the defense was granted a continuance.

As for the family and friends of Felix, they are grateful for answers, but are devastated to know that Felix will not be returning home to them alive.

“God has answered our prayers, thank you God,” commented Andrea Risken on the Victor Valley News Facebook group. “ His sister Kayla Medrano said, “Thanks to everyone who prayed for my brother, he is truly happy now. Resting in paradise.”   The Felix family wants to thank the community for their love, support and prayers.

His mother’s heart is understandably broken with the loss of her son. In a Facebook post Leonor Medrano posted:

Family and friends gathered together on the evening of May 22nd to place a memorial cross at the grave site where the body of Jimmy Felix was discovered.

I love you so much son. I truly don’t know how I can go on without you . My heart is broken and filled with sorrow.  I know that you are in a better place, I love you forever and you’re so beautiful to me. You have a beautiful heart and soul.  I’m so sorry I couldn’t do more for you. I wish I could have protected you I would have fought to the death, you weren’t supposed to go before me. I will do my best to live right and I will forever cherish the beautiful time that God me to be with you. I would do anything to hold you again, to see your precious smile that is just like mine. When I think of you my smile is yours. I love you so much son, this can’t be good-bye. So until then, that very sweet day when I get to go home to see you, and be with our Father in Heaven. I will live life to the fullest and dance, sing and cry, but I will see you son on that very sweet day. God help me.

The investigation is ongoing and anyone with information is urged to contact Detective Ed DeLaTorre or Sergeant Robert Warrick at (909)387-3589. Callers wishing to remain anonymous are urged to call the We-tip Hotline at 1-800-78-CRIME (27463) or you may leave information on the We-Tip website at www.wetip.com.