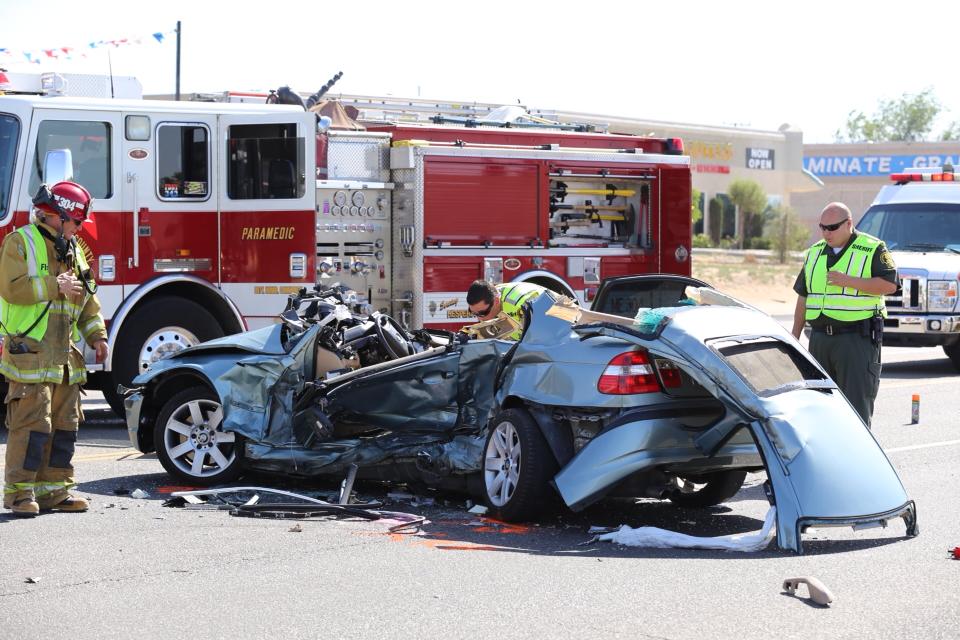 VICTORVILLE: (VVNG.com)-  Bear Valley Road was closed for several hours following a major traffic collision between two vehicles. The accident was reported just after 3:30 p.m., on Sunday at the intersection of 9th Avenue and Bear Valley Road.

A 19-year-old-female driving in a light blue BMW was struck by a silver Toyota Tacoma.

According to officer Stone, the BMW was heading south bound on 9th Avenue and attempted to turn onto Bear Valley Road. When she was struck on the driver side door by the pick-up truck traveling westbound on Bear Valley Road.

Firefighters had to use the jaws of life to extricate the unconscious female driver from the vehicle. It took approximately 20 minutes to remove her from the wreck. The unidentified female was transported by air ambulance to Arrowhead Regional Medical Center. Her injuries are currently unknown. The driver of the pick-up truck was taken to a local area hospital by ground ambulance with unknown injuries.

The Major Accident Investigation Team (M.A.I.T.) responded to the collision and processed the scene to determine the exact cause of the accident.

To follow this story and more join our FB group VVNG with over 39,000 members www.facebook.com/groups/victorvalleynews

Eight Injured and One Dead in Ft.Irwin Accident