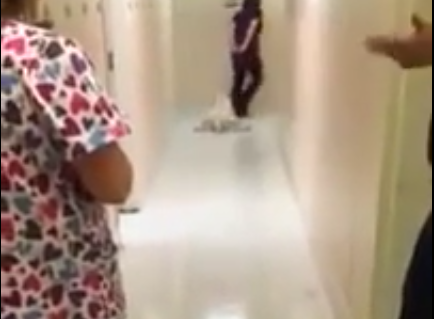 HESPERIA– (VVNG.com):  At 11:56 A.M., a short video was shared with Facebook group, Victor Valley Pets. The video immediately caused an uproar by animal advocates as well as those who are simply against the poor treatment of animals.

The short video, shows a woman dragging a whimpering dog through the shelter hallway. The person who recorded the video has identified the woman as staff at the Hesperia Animal shelter located at 11011 Santa Fe Ave E.

“I took the video last week as I was leaving, I was looking for my lost dog. I don’t know their names, but know they work there. I just  felt that this needed to go public,” said the person who recorded the video, who asked to remain anonymous.

The person who uploaded the video never anticipated it would create such shockwaves though out the Victor Valley community. “I didn’t know it was going to blow up like this”.

In the video you can see two staff members speaking with each other while the alleged abuse is taking place. No one in the video stops the female employee, who casually drags the dog by his leash behind her and no one speaks up to stop this act of cruelty.

Victor Valley News reporters reached out to the Hesperia Animal Shelter staff, the operator simply said, “The department is aware of it and investigating it”. A message was also left for Cheryl Lewis, a shelter supervisor, who is not yet available for comment on this matter.

At this time there is no further information available, information will be updated as it is received.