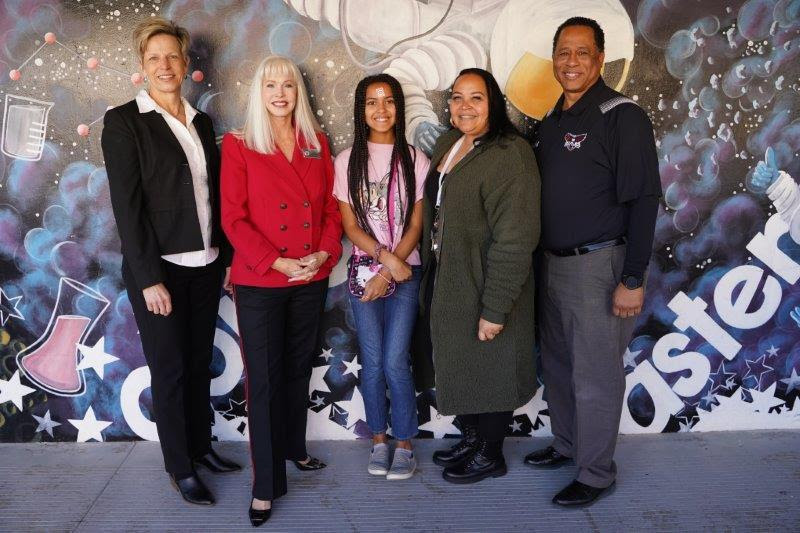 When Mayor Jones made the surprise announcement that sixth grader Natalia Jackson won the essay contest, Natalia was unaware that her family was waiting nearby to congratulate her.

“Natalia’s winning essay about author, poet, and activist Frances Ellen Watkins Harper was selected among essays submitted by students from the Victor Elementary School District.  A portion of Natalia’s winning essay will be displayed on a plaque honoring Frances Ellen Watkins Harper in the City of Victorville’s Civil Rights Memorial located at City Hall.  The plaque will be unveiled during a ceremony at Victorville City Hall on Martin Luther King Jr. Day, Jan. 16M,” city officials said in a news release.

“Natalia Jackson did a great job describing Frances Ellen Watkins Harper’s efforts to fight for equality,” said Victorville Mayor Debra Jones. “We’re inspired by Natalia’s essay that tells the story of a brave and confident leader who was committed to making a difference in so many lives.”

“We are very proud of Natalia for choosing to honor Frances Ellen Watkins Harper who championed change for women’s rights, especially for African American women,” said Victor Elementary School District Superintendent Lori Clark.  “I would like to thank the City of Victorville for providing a platform that encourages our students to research and learn about American social justice and civil rights leaders.”

Mayor Jones also congratulated Natalia’s teacher, Mrs. Parm noting that 2022 is the first time a winner of the annual essay contest has been from Irwin Academy School of Performing Arts.

A full-length version of Natalia’s winning essay can be viewed on the City of Victorville website at VictorvilleCA.gov/civilrightsmemorial.

All the plaques displayed in the Memorial have been donated by area businesses and organizations.  The Memorial is located at Victorville City Hall, 14343 Civic Drive.

With the installation of the bronze plaque honoring activist Frances Ellen Watkins Harper, the Memorial will contain eight plaques honoring Civil Rights Leaders as memorialized in the essays of Victorville students.

For more information about the Victorville Civil Rights Memorial including sponsorship information, contact (760) 955-3306 or send an email to civilrightsmemorial@VictorvilleCA.gov