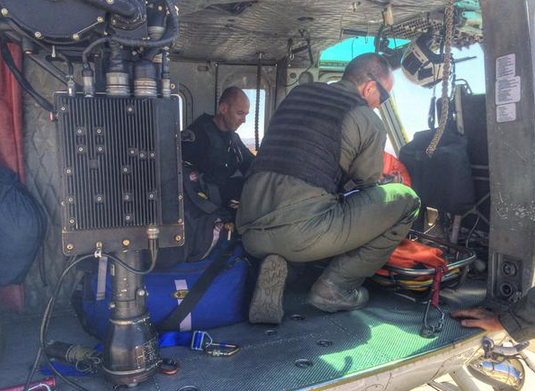 APPLE VALLEY-(VVNG.com): Dispatch received a call from a woman reporting that she was injured due to a fall on Bell Mountain. The injured woman reported that, due to the injury, she was unable to hike down the remainder of the trail. The nearly 1 mile hiking trail located in the Apple Valley area is a trail well-known by more advanced hikers.

The woman fell when she was approximately one-quarter of the way down the mountain on the south side. The Monday, April 13th call came in at approximately 1:45 P.M., and prompted Sheriff’s Air Rescue 6 to respond to hoist the woman off of the mountain.

At approximately 2:28 pm the woman was hoisted to safety and into the helicopter. The helicopter subsequently landed at the Apple Valley Airport where she was taken by ground ambulance for treatment of a broken leg.