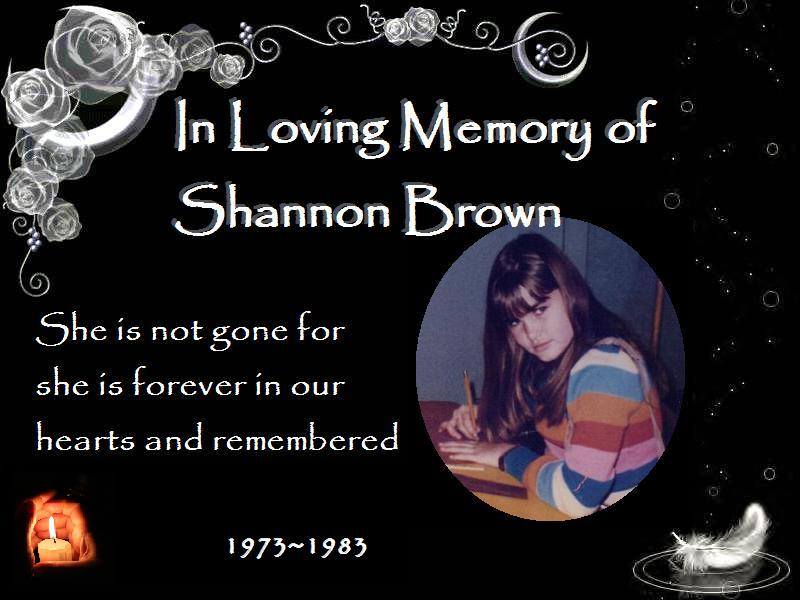 “Today is Friday, April 25th … 31 years ago a man named James McCalister decided to have a few drinks and made the decision to drive home while under the influence.

That same night a 10-year-old little girl named Shannon Brown was being driven home from the movies by her dad and Jim also made a decision. He decided to stop and help a stranded motorist.

From these too very different choices my sister was killed, a family was torn asunder and a man spent a few years in jail and then went on his way.

Its been over 30 years but I remember this like it was yesterday. The disbelief, the tears, the helplessness and the anger that this person could so callously put out her little life and then suffer no lasting consequences.

Is he still alive? I don’t know. Does he think of her?  I doubt it! But 31 years later I still think of my sister and she’s not so easily forgotten.

So my message to everyone who reads this is take a second and think of the ramifications of driving intoxicated. We see this on Facebook all the time, someone is killed .  There’s a vigil or car wash to help a devastated family remember or pay for a loved ones funeral. Some of us show up and pray or wash a few cars, many hit “like” and many more just scroll down and don’t give it another thought.

I don’t know who will even read this entire post, but I hope a few of you share it and remind others that the ramifications of a persons actions can last an entire life or end one.”