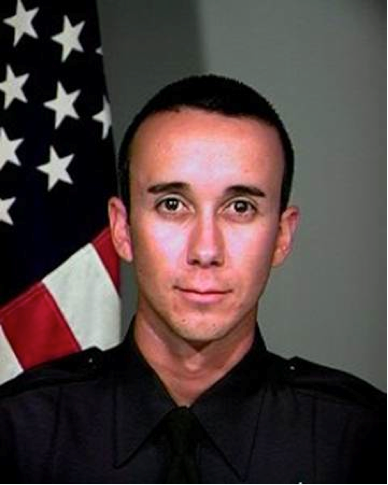 The San Bernardino Police Department have identified the wounded officer as 31-year old Gabriel Garcia. According to police, Garcia is out of surgery but remains in grave condition.

Please keep Officer Garcia in your thoughts and prayers as he is still in very critical condition, following a tragic officer-involved shooting this morning. Wounded Officer Gabe Garcia, 31, has served our department with honor and integrity since 2008. He is highly commended – a great officer, team member, and father. He is the son of another brave SBPD officer, Captain Ron Garcia, and has always displayed extreme professionalism and a great attitude toward his job. Officer Garcia has earned the utmost respect from fellow officers and the department as a whole. His calming and compassionate nature has earned multiple letters from citizens thanking him for his assistance with crimes such as armed robberies and carjackings. He is exemplary in every sense of the word.

Shortly after 2 a.m., suspects opened fire on two of our officers after they were approached walking near 19th and Garner. The senior officer on scene was struck multiple times. The trainee returned fire, mortally wounding a gunman who was found with a revolver and AK-47 next to his body. Relief from multiple law enforcement agencies arrived on scene for back up and five suspects have been detained – three men and two women.

The wounded officer is out of surgery and in critical condition at Arrowhead Regional Medical Center. He is joined by his family for support.

I would like to say thank you to the multiple agencies that arrived on scene to help our officers this morning including the San Bernardino City Unified School District Police, San Bernardino County Sheriff’s Department, California Highway Patrol and Union Pacific Police. In addition, the overwhelming support from our community this morning has been tremendous. We will continue to provide updates as more information becomes available.

Update from the Chief: Arrest made in conjunction with officer-involved shooting. Second suspect, Johnathan Contreras, 20, will be charged with possession of assault rifle and possession of modified (sawed off) rifle.