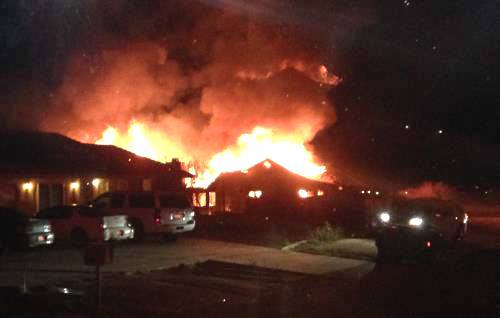 BALDY MESA: The San Bernardino County Fire Department responded to a reported structure fire in the 11000 block of Braceo Street in Baldy Mesa at 10:36 p.m. on March 8, 2014. The first arriving unit found a 3,000 square foot home fully engulfed in fire, with all of the occupants safely out of the residence.

Firefighters to performed a defensive attack on the fire from the exterior due to the amount of fire that had already consumed the home, while protecting an out building and two homes near the fire. Firefighters were able to hold the fire to the original structure, with no damage to the other buildings.

Twenty-three firefighters were able to control the fire in approximately 40 minutes. Due to the extensive damage caused by the fire, and a large amount of debris, firefighters extinguished the fire in just under 4 hours. No firefighters or civilians were injured during the fire. Damage to the home and its contents are estimated at approximately $400,000, and the cause of the fire is under investigation.

[box type=”info” align=”aligncenter” ]The San Bernardino County Fire Department reminds the public that during an emergency, it is important to allow access for fire department apparatus trying to get to the incident. Firefighters often encounter vehicles, and people attempting to get close to the incident. If you are near an incident, please clear the way so that firefighters can have access to the incident to perform their duties.[/box]