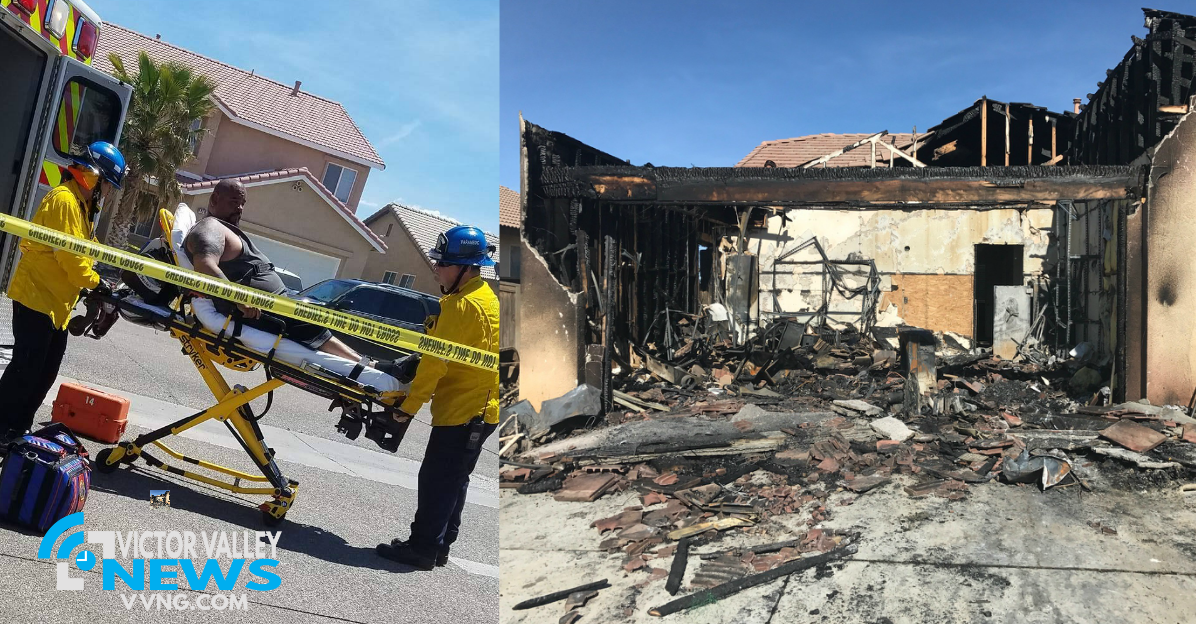 HESPERIA, Calif. (VVNG.com) A house fire in a heavily populated area near Cedar Middle School Wednesday morning was determined to have been caused by a THC extraction lab that exploded in flames.

On May 3, 2017, at approximately 11:15 a.m., Deputy Caudle assigned to Hesperia patrol was dispatched to a reported garage fire at 8457 Long View Avenue in Hesperia.

As Deputy Caudle arrived on scene he could hear what sounded like ammunition exploding along with the garage engulfed in flames.

Cedar Middle School is located to the rear of the residence, sharing a wooden fence as the house on fire. The school which serves approximately 1,000 students in 7th and 8th grades was in session during the explosions.

“The explosions were later found to be butane cans that exploded,” stated Sheriff’s officials in a press release.

Sheriff’s Arson/Bomb Detail were dispatched to the residence to assist the County Fire Inspector with the investigation. Investigators discovered evidence of what they believed to be a THC extraction lab.

Investigators from the Sheriff’s Marijuana Enforcement Team and Arson/Bomb Detail served a search warrant at the residence.

“Investigators located approximately 34 butane cans inside the garage. All of the butane cans ruptured sending pieces of the cans approximately 100 feet away, landing in the street. A large high-pressure steel oxygen cylinder ruptured, tearing a large hole in the side wall of the cylinder; launching the cylinder out to the sidewalk,” described Sheriff’s officials.

An unknown adult male was in the garage during the explosion.

Investigators believe the suspect was manufacturing concentrated cannabis at the residence at the time of the fire/explosion.

Emergency medical personnel responded to the residence and transported the unidentified male to a local hospital, where he was later airlifted to Arrowhead Regional Medical Center.

“The operation was capable of producing several pounds of concentrated cannabis per week,” authorities said.

The extracted THC from the marijuana is used to produce a product commonly known as honey oil, which is a higher concentrated product than the traditional method of smoking the plant material. THC or Tetrahydrocannabinol is the main or active ingredient in marijuana that causes the “high” when using the drug.

Investigators are in the process of identifying any suspects involved in the operation. Once the suspect(s) are identified a criminal report will be sent to the San Bernardino County District Attorney’s Office for prosecution.

[button color=”” size=”” type=”3d” target=”” link=””]The THC extraction process is extremely dangerous and has a high potential for explosion and fire due to the use of large amounts of flammable chemicals used during the extraction process. This chemical process is illegal and is a violation of California’s Health & Safety Code.[/button]