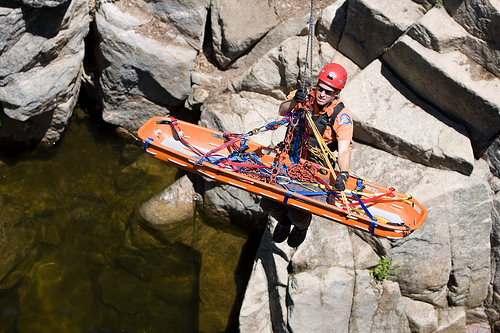 (VVNG) – On Sunday, May 18, 2014 at approximately 11:05 a.m., the San Bernardino County Sheriff’s Department Aviation Division, flight crew of air rescue-AR306 was requested by SB City Fire to assist with 2 motorcycles that went over the side of Hwy-18 between lower Waterman Canyon and upper Waterman Canyon.

It was reported that both riders were approximately 100 feet down and a hoist rescue was needed to recover the victims. Upon arriving on scene it was found that victim #1 had self rescued. Victim #2 was still 100 feet below the roadway and had moderate injuries.

Fire was also on scene and attempting to make contact with the victim from the top of the highway with the use of ropes. AR306 inserted two Air Medics via hoist, approximately 150 feet, to the area of the victim.

With the help of personnel from SB City fire, the victim was loaded into a stokes basket and hoisted into AR306. The victim was transported and released to ARMC.