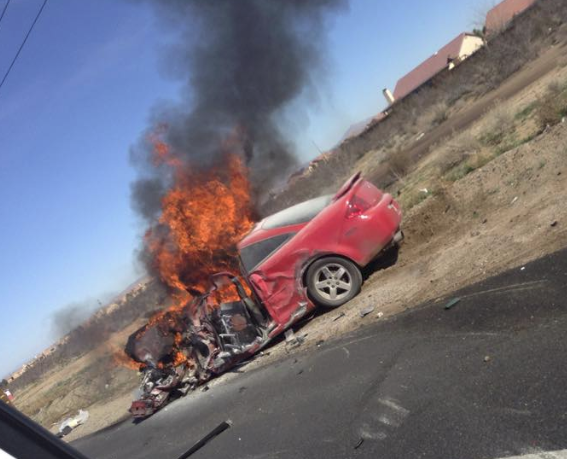 VICTORVILLE-(VVNG.com): On Monday, February 2nd at approximately 12:17 p.m.  dispatch received a call reporting a traffic collision in the area of Highway 395 and Bear Valley Road. The report indicated that there was a  three to four vehicle collision with a vehicle fire. The reporting party also stated that there was one male victim that appeared to be ejected from the vehicle.

Upon arrival, emergency personnel arrived to a Semi-truck that had been involved in a collision involving several other vehicles.

According to witnesses, the young adult male was driving northbound on Highway 395 between Bear Valley Road and Luna Road. The unidentified young male driver went into the dirt shoulder area attempting to pass the vehicles ahead of him. He lost control and swerved into the southbound lane subsequently colliding with the trailer of a semi-truck. The driver of the Pontiac was flung out of the vehicle just as it burst into flames due to the impact. The impact left the semi-truck trailer on it’s side leaving the load of dirt and gravel spilled on the ground.

Highway 395 was closed both northbound and southbound for medevac landing just north of Bear Valley Road. The closure was from Luna Road to Bear Valley Road and remained closed until Caltrans arrived to clear the roadway of Debris.

The driver of the Pontiac was airlifted to Arrowhead Regional Medical Center for treatment for a possible compound fracture to his leg.

There were no other injuries reported as a result of this collision. 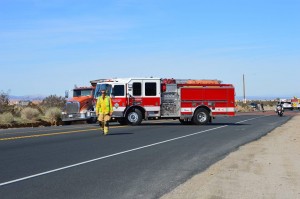 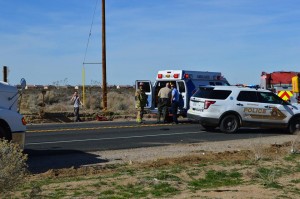 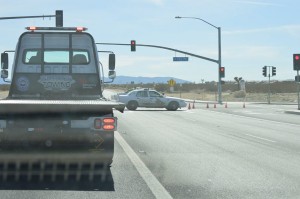 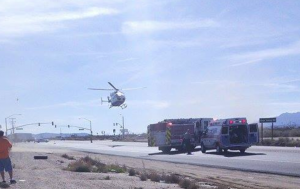 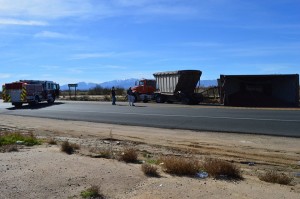 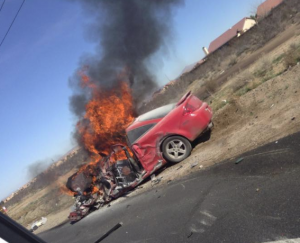