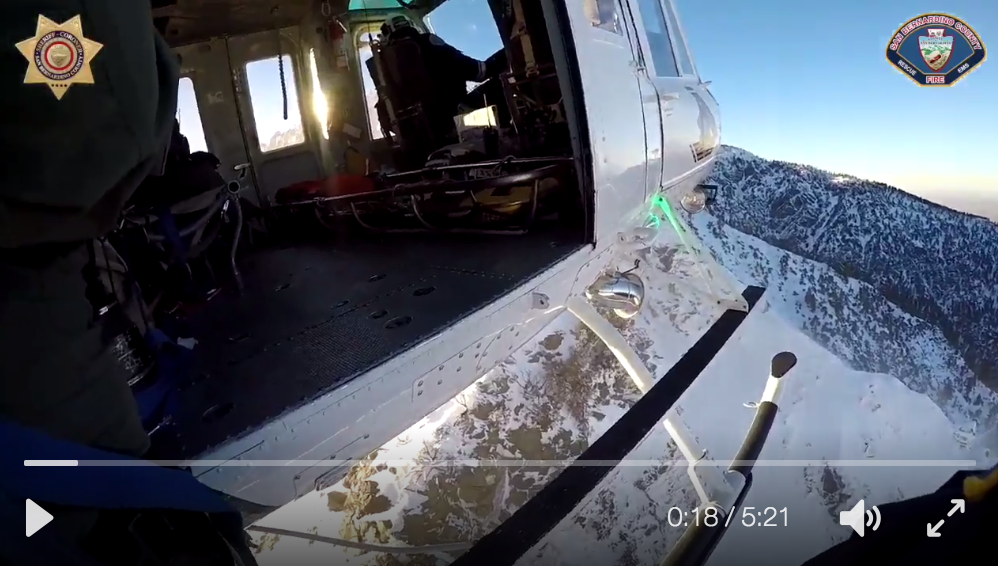 MOUNT BALDY – Jennifer Fujita, 34, a resident of Irvine was hoisted to safety after she slipped and fell down a snow covered ridge while hiking Monday afternoon.

On January 16th, the victim, and her brother were hiking down the Devil’s Backbone Trail near the Mount Baldy Summit at the 9200’ level. While hiking down, she lost her footing and slid down the snow covered ridge approximately 50 feet. The victim managed to use her ice ax to prevent her from falling further down the steep rocky ridge. The victim’s brother immediately called 911 and requested assistance.

Sheriff’s patrol helicopter 40King4 (Pilot Deputy Jon Roberg and Tactical Flight Officer Deputy Carlos Quezada) was dispatched to the location to attempt to locate the victim. Due to the circumstances and elevation, the crew of 40King4 requested the assistance of Air Rescue 307, which was staffed with Sheriff and Fire personnel, to also respond and conduct a hoist rescue. The victim’s brother provided vital information including their GPS location and clothing descriptions. The crew of 40King4 located the victim and her brother and relayed that information to Air Rescue 307. The victim was located on a steep snow packed ridge.

Sheriff’s Air Rescue 307 responded to that location and began assessing the situation. It was determined the victim was in a high-risk area, which would require a technical pick off hoist rescue. Pilot Corporal Mike Gilley hovered over the victim while battling high winds with gusts up to 45 mph. Crew Chief Deputy Ed Leon lowered Fire Captain Eric Spies down on the hoist to the victim 130 feet. Spies contacted the victim while remaining on the hook, and immediately disconnected her backpack, which fell hundreds of feet down the rocky slope. Spies placed the victim into a “Hasty Rescue Harness” and secured the victim to himself on the hook. Deputy Leon hoisted both Spies and the victim together up to and inside the aircraft. The victim was then flown to Cow Canyon Saddle and released to awaiting medical personnel.