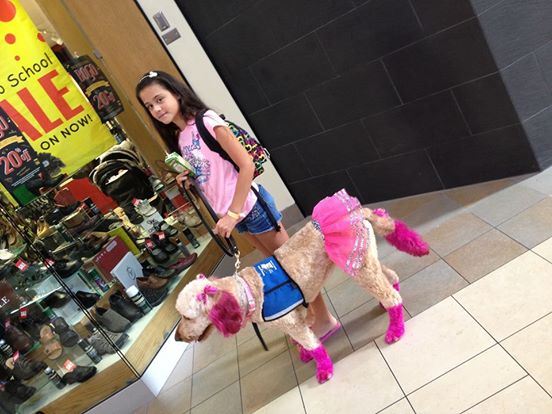 HESPERIA:(VVNG.com)- Type 1 diabetes (T1D) is an autoimmune disease affecting approximately 30,000 people in the United Stated States yearly, about half of those being children.  T1D is not curable, it is not caused by anything the person did or did not do, the person’s weight, exercise and eating habits have no bearing on the chances of being diagnosed with this devastating illness. Type 1 diabetes, unlike type 2 diabetes, is solely believed to be caused by genetic and environmental factors. A person with T1D needs to use insulin injected into their bodies several times a day in order to survive.  Those who suffer from T1D, must get a small blood sample by pricking their finger several times daily to test their blood sugar levels. “She checks her sugar at least 10x a day. We check her through the night while she is sleeping.” shared Stephanie Rodriguez, Serissa’s mom.

NIDAD sent Serissa a scent package. The family was asked to gather cotton ball swabs of Serissa’s saliva at all different levels and overnight so her Diabetic Alert Dog, Savannah can be trained.

Serissa Gonzales, a 10-year-old 6th grader at Mission Crest Elementary school is diagnosed with Type 1 Diabetes in November 2012. Serissa, although her illness has been a battle like others with T1D,  has found the strength to start a non-profit organization to bring support and awareness to others with Type 1 diabetes. “We now have a non-profit license so we can continue to help other kids with their diabetes needs or go to diabetes camp,” said Stephanie.  This amazing family, rather than just thinking of their own battle with type 1 diabetes, started Serissa’s Diabetic Foundation to help others facing similar challenges.

Earlier this year Serissa’s family had the opportunity to obtain a service dog from the National Institute of Diabetic Alert Dogs (NIDAD). Serissa takes her service dog, Savannah everywhere with her. Savannah, a Goldendoodle (Golden Retriever and Poodle mix), was specially trained to alert those around when Serissa has dangerous changes in her blood sugar. Her and her family have become quite fond of the special dog that is trained to help keep Serissa safe.

Serissa’s mom, Stephanie Rodriguez, went to Mission Crest Elementary School to request Serissa gets an approval from the school to bring her service dog with her to school. Her mother thought since there were laws protecting those facilitating service dogs that the school would just give them forms and the pair would be on their way to school. Unfortunately, the school staff, who was unaware of the laws and the necessity of service dogs denied the request for Savannah to attend school with Serissa.

Stephanie kept on the school to allow the dog to attend school with her daughter explaining the need and the training the dog has been through to provide service for her young daughter. Although, Stephanie did not plan to stop fighting for her daughter’s rights, Serissa went to school without the security of her service dog, Savannah.

After exhausting many other options to get the school to budge on their no pets policy, Stephanie requested the help of the NIDAD trainers who worked with Savannah. The NIDAD explained the training Savannah went through and the laws regarding service dogs. Now Savannah will be the first service dog attending school in the Hesperia Unified School District.

Serissa and Savannah attended their first day of school together today, September 10th.

“Savannah likes the blow dryer. Shes getting ready for her 1st day of 6th grade in the morning. It was a short fight but thanks to her trainers at NIDAD Savannah will be with Rissy at school. Last week, Serissa’s sugar dropped to 38 while she was in class. Serissa said the only reason she knew was because her hand was shaking and she couldn’t write,” posted Stephanie Rodriguez on the Serissa’s Diabetic Foundation Facebook page.

This fight was likely not only one for young Serissa, but will likely pave the way for others who depend on the use of service dogs to protect them from any dangerous situations by alerting those who can assist.

“One man was keeping Savannah from going to school based off what he thought was right. He said since Rissy’s Sugar was under control she didn’t need her dog. Someone with Type 1 never has their sugar under control. Today after speaking to the trainers at NIDAD he called me and basically was welcoming Savannah to school tomorrow. For once I was speechless, I didn’t know he had spoken to NIDAD so I didn’t know where it was coming from. Serissa has the biggest smile on her face that she is now able to take her service dog. I’m sure she feels relieved,”  posted a relieved Stephanie Rodriguez on her Facebook wall.