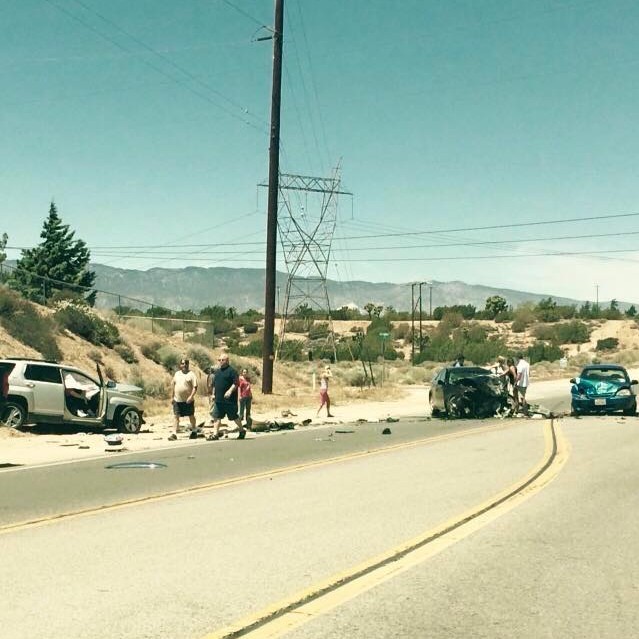 PHELAN:(VVNG.com)- According to authorities, driving under the influence of methamphetamine is suspected to be a contributing factor of a fatal traffic collision, that claimed the life of a 63-year-old Hesperia man.

The major damage three vehicle collision occurred in the area of Phelan Road and Bellflower Street in the City of Hesperia at approximately 11:35 A.M., on Tuesday, June 16, 2015.

Through investigation it was learned that the 63 year-old driver of a Cadillac was westbound on Phelan Rd. when his vehicle went into oncoming traffic and collided with a GMC Terrain, occupied by a 76 and 71 year-old couple from Oklahoma. The vehicles hit nearly head on and spun, causing the Cadillac to now come into contact with a Kia that was traveling eastbound on Phelan Rd. and was occupied by a 48 year-old female of Phelan.

The driver of the Cadillac was flown to LLUMC where he succumbed to injuries suffered in the collision. His name is being withheld pending family notification.

The 76 year-old driver of the GMC was flown to ARMC with major injuries to include a broken arm and possible broken leg. Both the passenger of the GMC and the driver of the Kia were taken by ground ambulance to ARMC for complaint of pain and moderate injuries.

Authorities stated speed does not at this time appear to be a contributing factor.

This is an ongoing investigation by the Hesperia Station Major Accident Investigation Team (MAIT).

More information will be available after a thorough investigation into the collision has been completed.