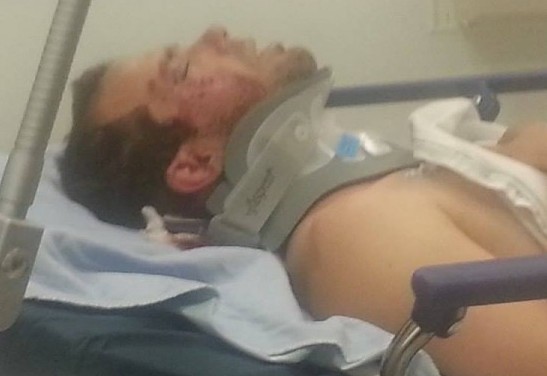 HESPERIA-(VVNG.com): A Hesperia man is at home and recuperating after sustaining major facial injuries from a skateboarding accident on Wednesday afternoon. At about 2:34 p.m. deputies from the Hesperia Station and medical personnel responded to Main Street and H Avenue.

Johnathon Pelchy, 30 was found lying in the road with a dog and skateboard nearby, when a woman, identified only as “Sunshine” called 911 and stayed by his side while keeping the dog contained. His roommate, Yvonne Hook said that the incident occurred when Pelchy was on his skateboard having the Husky pull him. “[After he fell] my dog was freaking out trying to get to him,” said Hook.

Pelchy was airlifted to Arrowhead Regional Medical Center for the treatment of a concussion, and two facial fractures. “He’s in a lot of pain, but doing well,” said Hook. “Papa Husky”, the dog suffered no injuries as a result of the skateboard accident.

Head injuries as a result of skateboarding accidents are the cause of many hospital visits and in some cases even death each year.  Skateboarders are encouraged to always use the proper safety gear including helmets, pads, wristguards and appropriate footwear.