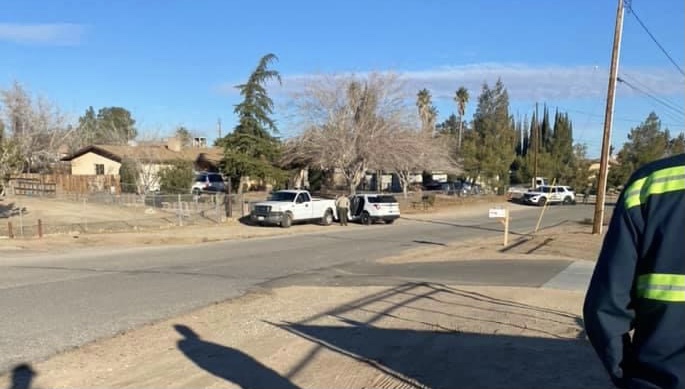 HESPERIA, Calif. (VVNG.com) — An armed Hesperia homeowner defended himself and his family after exchanging gunfire with an intruder trying to break in.

It happened on Monday, January 18, 2021, at about 3:36 am., in the 17000 block of Orange Street. The suspect, later identified as 39-year-old Erick Contreras, a resident of Hesperia, showed up at the residence and attempted to force entry through the front door.

The homeowner shared a home surveillance video of the incident with JGKIX, a photojournalist, along with what happened. The homeowner said at about 1:30 am his camera system picked up the suspect going into yards and scoping things out.

“He came to my house it looks like 3-4 times and the fourth time he starts kicking the door and demands to be let in. Wakes up my wife, wakes me up, I run to the front door to see who it is,” stated the homeowner. “I see him pull out a gun, at that point I back up go back to my room I get armed, I come back to the front.”

According to the homeowner, he’s not sure how it started but he and the suspect started to exchange gunfire from both sides. “We were about 6-7 feet apart from each other through walls, trying to shoot each other.”

Contreras fled the scene in his vehicle, a white pickup truck, and fired at least one round towards a residence as he drove away. Sheriff’s deputies arrived and located the suspect’s truck in the 8000 block of Avocado Street, within camera view of where the shootout happened.

The Specialized Enforcement Detail (SED) responded and attempted to get Contreras to exit the residence through public address announcements. Sheriff’s officials said, “when those attempts were unsuccessful, SED forced entry into the residence and Contreras was not located.”

Through investigation, deputies learned of Contreras’ possible whereabouts. SED responded to a residence in the 18000 block of Albany Street where Contreras was located and was taken into custody.

Authorities said the motive for the shooting is currently unknown. The homeowner said he’s never seen the guy and believed he was on drugs. “If I didn’t have a gun this guy could have hurt us really bad.”

Dempsey Construction completes build out of LaVerne Elementary in Hesperia