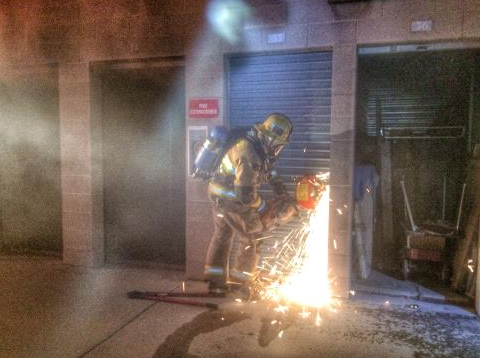 HESPERIA-(VVNG.com):  On Friday, April 3rd at approximately 9:00 P.M., firefighters were dispatched to the Universal Self Storage located at 10150 I Avenue to respond to a commercial fire alarm. Although there were no proceeding reports of smoke or fire in the area a single engine company arrived on scene. As they arrived, they reported smoke showing from three units of the single story, multi-unit storage facility.

As part of a commercial structure fire response, three additional engine companies arrived on scene to assist in extinguishing the blaze. The three units consisted of two truck companies and a battalion chief. To prevent the spread of the fire to adjacent units the call was upgraded to a 2nd alarm, which added additional resources. Included in the additional resources was the Apple Valley Fire Protection District as well as an investigator from the County’s Office of Fire Marshal.

County Fire initiated an aggressive interior attack and was able to confine the fire to one storage unit in approximately 20 minutes. The adjoining units sustained smoke and water damage, and there was an estimated property loss of $10,000. County Fire was able to save approximately $400,000 in property and belongings.

There were no injuries to civilians or firefighters and the fire is currently under investigation by the Office of the Fire Marshal.

[box type=”note” align=”aligncenter” ]County Fire asks that citizens avoid driving over charged fire hoses that are in the street. Driving over hose lines can cause them to break and jeopardize the lives of firefighters by interrupting the water supply to crews inside the burning building.[/box]