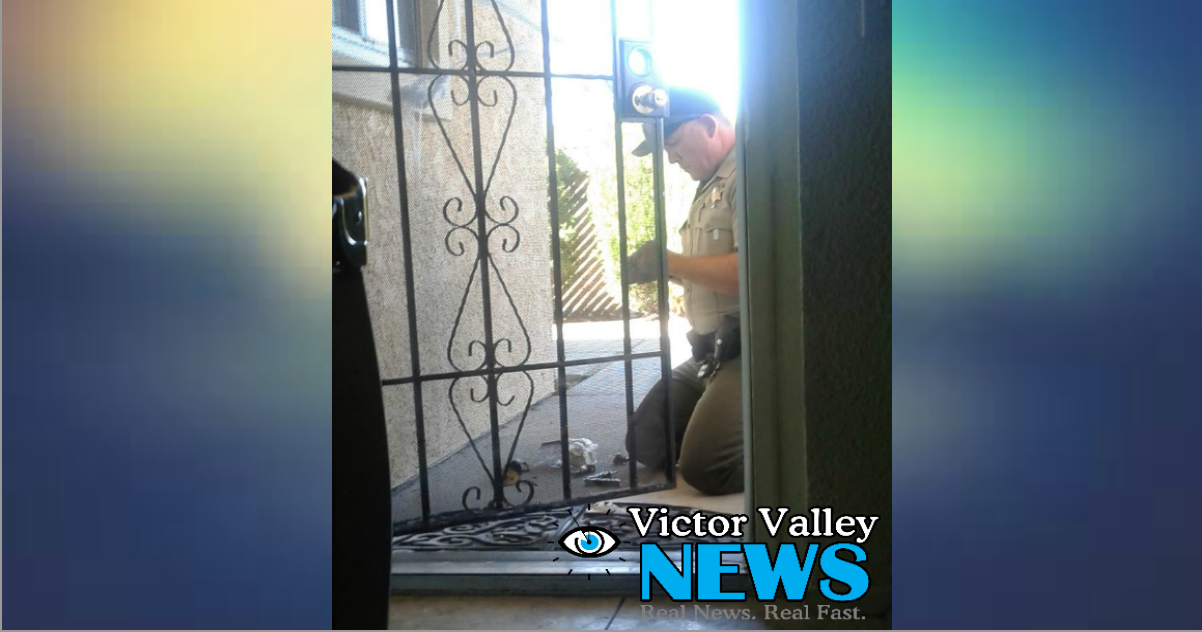 HESPERIA, CA: (VVNG.com)– A Hesperia deputy was captured on photo by a local woman after he went above the call of duty to help her family.

On Monday, October 3rd deputies were dispatched to I Avenue and Laurel Street in Hesperia after a young girl was found wandering alone wearing nothing but a diaper.

“I had several deputies assisting me going door-to-door looking for the parents. That’s when one of us got flagged down by the mother and she was obviously distraught like any parent would be,” stated Deputy Lafond, “then she began telling me her story.”

According to the child’s mother, who also spoke with Victor Valley News, her 7-year-old daughter was diagnosed with autism at an early age and has a history of running off. They had previously taken measures to place child safety locks on the doors, but the young girl soon figured out how to use them.

The mother fell asleep after she laid down to breastfeed the families newest addition. It was during that time the child managed to escape.

“I could see the hurdles the mother has to go through. She was telling me about not being able to sleep, and that she has to stay up because her daughter gets out of the house all the time. She has learned to use those child safety locks that you squeeze and has gotten out,” Lafond said, as he recalled the conversation he had with the mother.

Lafond came up with the idea that he could get a dead bolt lock that would require a key to get in and out of their apartment. He went down to the local K-Mart and explained to the manager what he was looking for and why. The manager on duty, Luis Flores, offered to donate the double keyed lock to Deputy Lafond.

Lafond went back to the home to personally install the lock on the metal screen door. The mother was so enlightened by deputies act of kindness that he showed to their family.

Unbeknownst to the Lafond she snapped a photo on her cell phone and later shared it with a Victor Valley News reporter.

“She’s doing everything she can do with what she has,” said Lafond. “Unless you are living in that situation or have the first-hand experience most people have no idea what these parents go through.”

[box type=”note” align=”aligncenter” class=”” width=””]The San Bernardino County Sheriff’s Department is currently working on a program called “Safe Return”. The purpose of the program will be to identify and help people who have Alzheimer’s, persons who might be at risk of going without medication, and people who suffer from severe autism. The “Safe Return” program is expected to launch before the end of 2016. [/box]