HESPERIA : (VVNG.com)- On September 3rd at approximately 4:00 a.m. there was a break in and theft at ServiceMasters First Response in Hesperia. ServiceMasters is an emergency response business, assisting High Desert residents since the late 1950’s. The business prides themselves in being the first of their kind and the largest here in the high desert. They serve the community with a 24 hour flood and fire disaster response in order to help get people back into their homes as quickly as possible following an emergency.

The Hesperia based company has been around so long that they have been at their 13,000 square foot Lemon street and E street facility for about 35 years. President, Troy Smithson shared this incident mainly to protect the community that he cares about.  “It appalls me that someone in our own industry, someone that is entrusted inside someone’s home did this.” said Smithson.  He explained last year there was also a theft, that time six of their vans had been broken into with theft of approximately $16,000 of equipment. “They later found the thieves and recovered some of the property.  I was upset of course, but after finding out that it was someone trying to get some quick drug money I understood. Not that it was alright, it was just to be expected”.

The business has fourteen surveillance cameras throughout their facility and the parking area. The thieves, when committing the crime had passed by valuable consumer type items to get the items that are very specific to their field.  Knowing that they targeted those specific items lead Smithson to believe it is someone doing the same kind of work as their business. “We pay a lot of money to certify and recertify our employees to be drug and crime free.  It is important to us since, these people are to be trusted in someone’s home,” said Smithson.

The footage shows the suspects breaking out the front window and two male suspects loaded somewhere between $10,000-$20,000 worth of business equipment into their white work van. The equipment stolen is used for extraction of water and restoration. At this point, Smithson is unsure of where leads will get them or if  their property will ever be located. The footage is somewhat grainy and the license plate did not show up clearly. He really was mainly just very disappointed and concerned to know that someone with such little integrity is doing business in someone’s home.

There is no clear description of the thieves, but the vehicle driven by them was a late-model GMC or Chevrolet cargo van with sliding door, no windows on side or back and non-stock wheels. 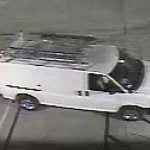 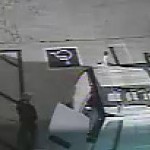 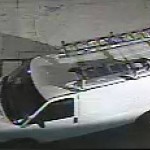