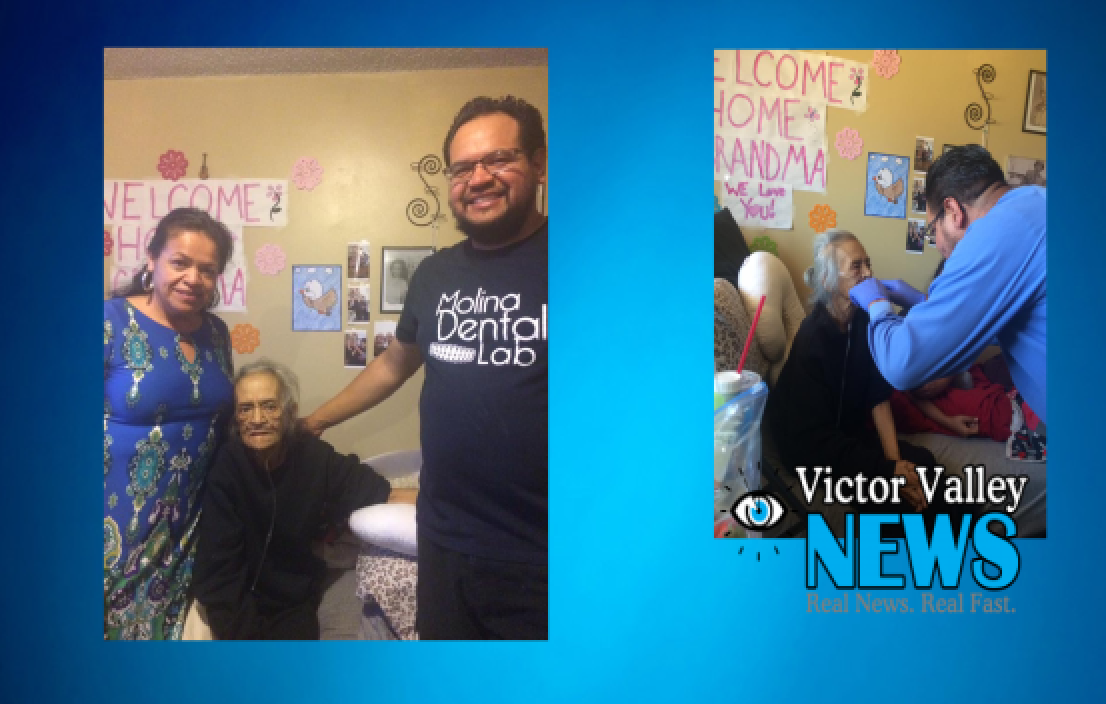 APPLE VALLEY-(VVNG.com):  A 77-year-old woman was given her smile back on Monday, according to her grandaughter, Angie Hernandez. On Friday, May 20th Hernandez reached out to the Victor Valley News Facebook group members asking for help to get some low-cost dentures for her grandmother, who is on hospice.

Esther Rodriguez was put on hospice due to having incurable Lung Cancer and recently during a hospital stay had her dentures thrown out by hospital staff. “She cried every day for her teeth, she was on a liquid diet because her health,” said Hernandez.  “She has thankfully progressed and is able to eat softer solids but couldn’t do so with out her teeth.”

Lauren Starkey, a dental assistant at ProCare Dental, brought Denture Lab Technician Luis D. Molina’s attention to the post. Starkey and Molina together arranged to provide dentures free of charge to Rodriguez. “I normally service dental offices, I understand how hospice patients don’t have that much time so I knew these dentures had to be built quick to make her happy,” said Molina, owner of Molina Dental Lab.

Starkey and Molina went to where Rodriguez is staying in Hospice in Apple Valley on Sunday, May 22nd and the dentures were complete by Monday, May 23rd. “She’s so happy to have teeth!! She was biting everyone,” Hernandez laughed. “She was eating baby food and is now excited to have Chinese!” Hernandez does not think she could have given her grandmother this gift without the help of Starkey and Molina, and she is very grateful.

Time was of the essence in making a woman who was sad because of missing her teeth into a woman who can grin from ear-to-ear while eating her Chinese food.

The family is now preparing for the passing of their beloved grandmother, Esther Rodriguez. They are asking for well wishes for their grandmother and if anyone would like to help they have started a Go Fund Me Account to assist with the final expenses for Rodriguez.

“It’s for all funeral expenses because she is too weak for any treatment, and sadly it will come to that so we are preparing,” said Hernandez. “This will help us with the costs of the plot, service, flower arrangements, coffin, a head stone, and the cost to place my grandfather’s ashes in her coffin.”