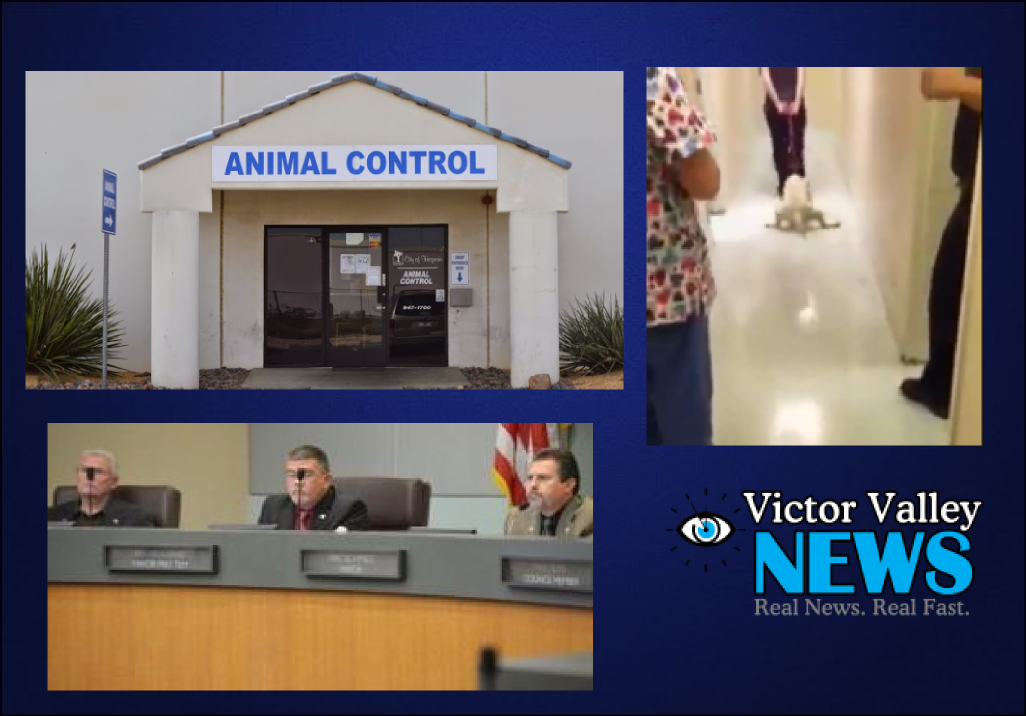 The actual photo of the bloody dog is too graphic to share with the public. Victor Valley News has decided to only show the top portion of the image.

HESPERIA-(VVNG.com): On May 6th the Hesperia Animal Shelter made a long-awaited announcement via their Facebook page that some, including a recent shelter employee, felt was a smokescreen to hide the real happenings at the shelter.

Cheryl Lewis, the former shelter supervisor was “forced to retire” according to shelter employees.

By retiring Lewis will be able to enjoy the same benefits as all others that retire benefit from. According to those employees, who have asked to remain anonymous due to fear of repercussions, Lewis was asked to retire as a result of prior unrelated allegations.

“The City cannot confirm the employment status of any of the staff members in the video,” said City Public Information Officer Rachel Molina.

The woman who was seen on the infamous dog dragging video, whose name will not be divulged due to safety concerns according to past and present shelter employees was not fired and did not resign.

“I no longer work at the shelter, but I did at the time the video was taken. I have been seeking other employment for about a year and found a good job so I left. I think they are counting me as one of the two that are no longer employed at the shelter” said a past employee. “What you saw on the video is peanuts compared to the things I have seen her do, I have seen her do terrible things.”

Friends that still work there have told the past employee that she is planning to come back to work at the shelter in the next week or so.

“I did not want to speak out, but when I heard she was returning I had to because I do not think things will fully change with someone like her there,” he added.

When asked about the video and the treatment of the dragged dog, later identified as Mia, he said, “That is not the

first time, she just got caught that time. Anything she could do to get out of work she will”.

The things going on at the shelter, according to several past employees and volunteers that chose to speak out are very similar. A Victor Valley News reporter was told if anyone crossed Lewis, she would brand you as “crazy”  and block those people from rescuing or volunteering at the shelter. They also said she would search through Facebook to see if anyone was talking about her negatively and if they were, they and/or their rescue would be blacklisted.

The past employee interviewed mentioned that the woman in the video dragging the dog was upset the day of the dog dragging so although she had several people there that would have been happy to lift the dog she did not ask.

He described her as “rough and uncompassionate” when she handled dogs, only spending time and energy on dogs that she would be giving to her friends with rescues. These rescues, he said, never took dogs with issues, they never wanted older or those with even minor health problems or injuries.”They only took the cream of the crop, a lot of beautiful German Shepherd dogs.”

Our reporter was also told that animals that made too much of a mess were euthanized, perfectly healthy animals were on a regular basis.

When asked why these healthy animals were being euthanized, Lewis would claim it was due to the lack of space, even when there were over twenty or more empty kennels. Although the shelter has the space and facilities to hold farm animals other than dogs and cats, since they did not know how to work with those animals most  would also be euthanized. When employees would offer to work with the “crazies” in order to place more animals, Lewis would prevent them from doing so.

When Lewis left, employees said that the canned pet food donated that she would not let them feed to the animals was locked in a cabinet with much of it expired. Employees got away with anything as long as they kept Lewis happy is what several employees and volunteers reiterated in multiple interviews.

“She would not hire people unless she felt she could make friends with them. If she had one run in with a volunteer that spoke up they were permanently disqualified from being hired,” said the past employee.

Although, there is much negativity surrounding the shelter and animal control, many had positive things to share regarding their experiences.

my dogs there and the staff was very kind and helpful. I also witnessed an employee taking a new intake dog for a walk because he was so nervous,” said Rhonda Litaker.

On March 9th, Molina shared the following,”To ensure that all animals in the shelter receive the proper care, staff from City Hall went to the shelter immediately upon learning of the video to reinforce proper care procedures will all staff members.”

Animal advocate and rescuer Kelly Reedy said, “I’ve pulled a couple of dogs for rescue and everybody I dealt with was very nice and accommodating, including Cheryl.”

When speaking about the “investigation” that the city spoke of to seemingly appease the outraged public, the past employee, who was interviewed during the investigation said, “The city did not care that the dog was being dragged, during the investigation.  They were more concerned about who took the video. People feel that putting video surveillance is the only way to get the truth since Cheryl handled it so dishonestly hiding things, running it like high school drama club. She would say, “if they said something bad about me they will not be able to pull here”.