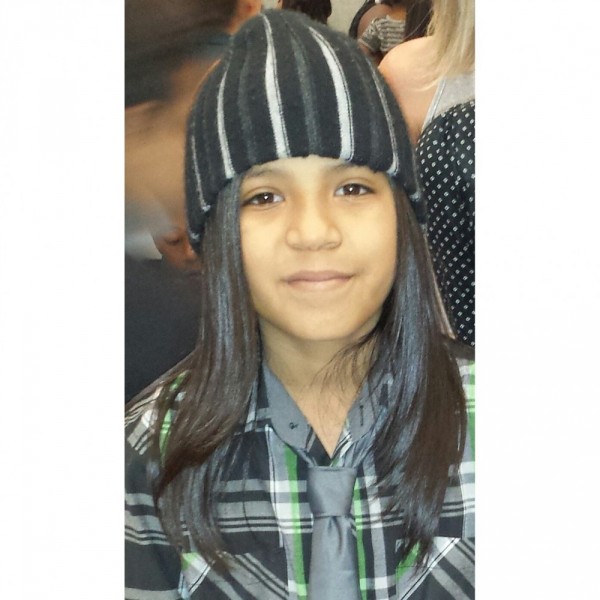 (VVNG.com)- Elias Mendoza III is an 11-year-old boy who is now finishing up his 6th grade year at Juniper Elementary. Elias will be entering the 7th grade in August at Ranchero Middle School. Elias enjoys the things other boys his age enjoy, but he is not your average boy by any means. Two years ago this young Hesperia resident decided he wanted to grow his hair out in order to donate it to Locks of Love.

“He stopped wanting haircuts over summer vacation in 2012. We thought it was just a phase or style he wanted to try. At first he didn’t tell his dad and I why he wanted to grow it, he did not tell us until a few months later when I told him he needed a haircut for the new school year,” said his mother Gloriana Mendoza.

Gloriana said her son has always been a giving person, she has always been proud of how giving and caring he was.  Upon doing some research, Gloriana realized that Locks of Love may not be the best option for her son’s generous donation. “As a parent, I did research and sadly learned that Locks of Love sells, and throws away most donated hair. They also charge close to $2000 for a hairpiece,” added Gloriana. With the information provided to her by Top Hat Barber Shop, she was able to get information about an organization called, Children with Hair Loss.

Children With Hair Loss (CWHL), is a non-profit organization that originated in 2000, when their founders realized there were no other organizations that provided hair replacements free of charge to people in need. CWHL focuses not only on Cancer patients, but children who have lost hair due to Alopecia, burns, and other diseases and disorders. Through hair donations donated by generous people like Elias, Children with Hair Loss has been able to provide an average of 300 human hair replacements and care kits per year. These hair replacements and kits are provided to those in need of them free of charge. Elias and his very proud mother decided that CWHL is where they wanted Elias’ hair to be donated.

Not only is soon to be 7th grader Elias, donating his hair to CWHL but he will also be shaving his head to raise funds for St. Baldricks Foundation. St. Baldricks Foundation is an organization focused on the research of childhood cancers. The idea of St. Baldricks is to raise funds by individuals and groups of individuals shaving their head for a cause. The head shavings are done for donations in order to raise funds for the research of childhood cancer. The way the organization’s events work is you either become a “virtual shavee”, meaning you name the date, time and place you will be shaving. You share the information with your friends and family to help get donations to raise funds to fight childhood cancer. St. Baldricks also does large events where people get together at a specified location and do a shaving as a group. These events are a fun way to get together and support the cause as a team.

“I’m very proud of my son and would like to help him raise as much as he can. It’s been a tough two years getting teased and being called a girl. Surprisingly the majority of those people were adult strangers who did not even knowing the story behind it,” said Gloriana. Elias will be a St. Baldricks, “Virtual Shavee” getting his head of  long brown hair shaved to benefit not one, but two charities on July 18 at Top Hat Barber Shop, in the city of Victorville.

To support young Elias on his selfless mission, please see his St. Baldrick’s Page and make a donation.