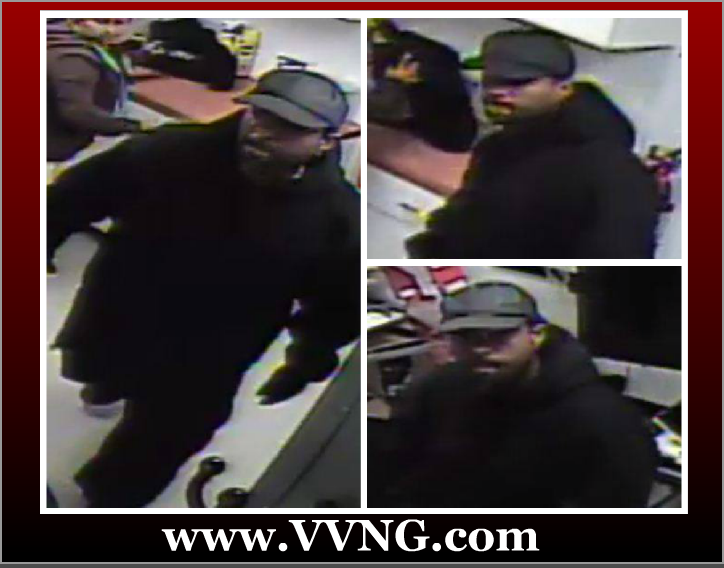 The Sheriff’s Department is asking for assistance in identifying the suspect shown in these photos in connection with an Armed Robbery at the AT&T Store in Highland.

On 12-30-13 at about 8:17 p.m., Highland Sheriff’s deputies were dispatched to an armed robbery that had just occurred at the AT&T Phone Store on Greenspot Road in Highland. Deputies arrived on scene within minutes of receiving the call and spotted a white Lexus leaving the parking lot with no headlights.

Deputies believed it to be the suspect vehicle and attempted to initiate a traffic stop. The vehicle failed to yield and led deputies on a lengthy pursuit that spanned across several inland empire freeways. The pursuit terminated about one hour later, after the suspect vehicle crashed into a residential fence in Riverside. The suspects fled on foot and were captured a short time later. No one received any injuries as a result of the pursuit. During the pursuit, the suspects were seen throwing unknown items out of the vehicle.

Detectives responded to the scene of the robbery and are conducting an on-going investigation. It was found that a suspect entered the store alone, armed with a semi-automatic handgun.

The suspect ordered the employees and customers (including a small child) to a back storage room, where the suspect had the employees load up bags with numerous cellular phones and other mobile devices. The suspect then stole an undisclosed amount of money from the cash registers, and fled the scene.

Investigators say it was a black man, 5’8″ to 5’10” tall with a heavy build, believed to be in his late 30s with gray and black patchy facial hair. He was last seen wearing a black baseball cap, dark colored sweat pants with cargo pockets, and a dark fluffy jacket with a hood.

Anyone with information about the robbery, or who may have been in the parking lot at the time of the robbery is asked to contact the Highland Police Department.