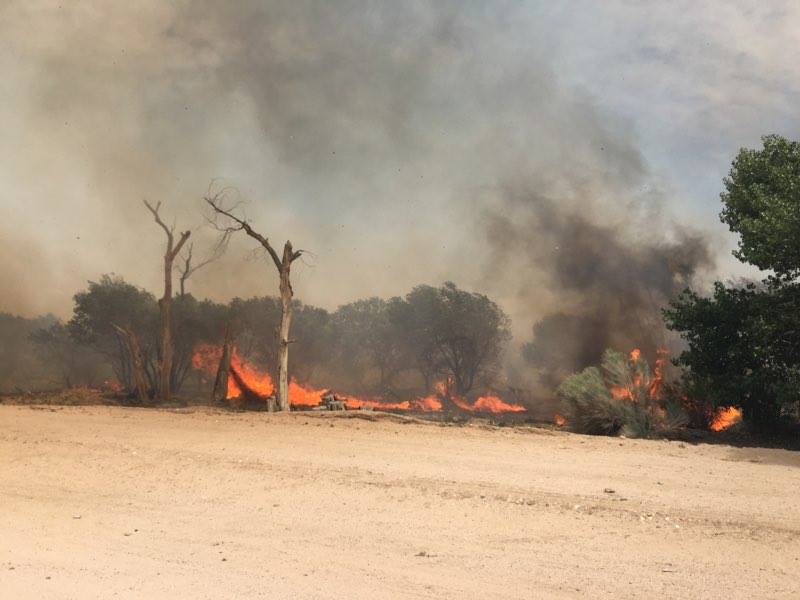 UPDATE (6:14 p.m.):  Fire crews have a line around the fire and will remain in place overnight.

UPDATE (5:00 p.m.):  As of 5:00 p.m. according to San Bernardino County Fire officials, the fire spread to 20 acres and was 75% contained. All roads are reopened to traffic and all threats to structures were mitigated.

Initial reports were made just before 2:00 p.m. indicating there was a vegetation fire in the area. Smoke from the fire was witnessed as far Pinon Hills residents said.

When firefighters arrived they located the wind-driven fire that was fueled by the heavy river bottom vegetation. Per scanner traffic, the fire was approximately 5-acres in size. Numerous horses and stables were threatened by the fast northerly spreading fire.

County Fire Engineer Jeff Allen told Victor Valley News that no structures other than the stables are being threatened at this time. There are no evacuations at this time.

As of 2:35 p.m. Helendale Road is shut down both north and southbound from Vista Road to Sunshine Lane.

The story is still developing, information will be updated as it is received.