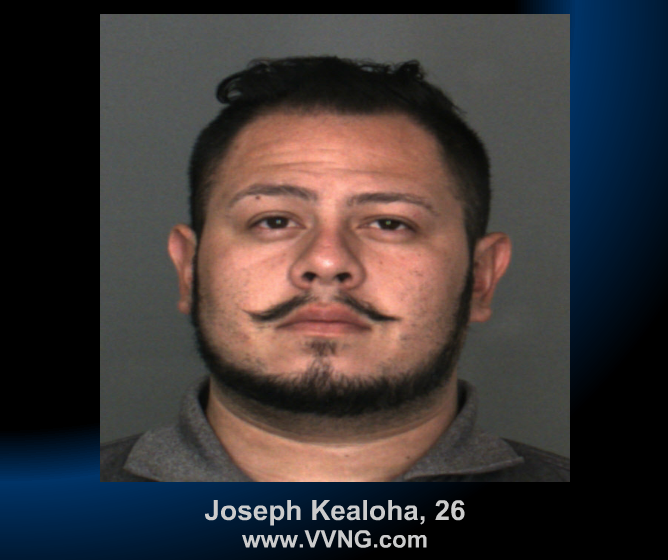 VICTOR VALLEY-(VVNG.com): A 26-year-old Victorville man and volunteer church group leader has been arrested for sex crimes involving a 17-year-old male and is being held on $500,000 bail.

According to authorities, on Monday, December 15, 2014, at approximately 1:00 p.m., Deputies from the Victorville Sheriff’s Station began investigating a report of unlawful sexual intercourse with a minor. The reporting party, the victim’s father, called the station to report that his son disclosed he had a year-long sexual relationship with Joseph Kealoha, and a volunteer group leader at the High Desert Church in Victorville. Kealoha’s role was to mentor and assist adolescents in small study groups.

The San Bernardino County Sheriff’s Department’s Specialized Investigations Division, Crimes against Children Detail took over the investigation. Upon further investigation, detectives learned that the victim met Kealoha while attending High Desert Church, specifically during a youth beach trip in August of 2013. Shortly after meeting, Kealoha began a dating relationship with the minor which ultimately led to sex acts. According to statements provided by the victim, these acts occurred monthly throughout the duration of the relationship, which came to an end in September 2014.

In addition to Kealoha’s volunteer position at the High Desert Church, he is also employed as an instructional aid at Morgan Kincaid Preperatory School, as well as a program leader at Bradach Elementary School’s, “Think Together” program, both schools being part of the Adelanto School District. Kealoha was subsequently relieved of his duties at the church and the schools.

On, Tuesday, December 16, 2014, Joseph Kealoha was arrested on the above charges and booked into the Central Detention Center located in San Bernardino, with a bail amount of $ 500,000. His next court date is scheduled for December 29, 2014 at 8:30 a.m. in Victorville Superior Court.

Anyone with information regarding this incident, specifically juveniles that may have had isolated contact with Joseph Kealoha, is urged to contact Detective David Clifford of the San Bernardino County Sheriff’s Department’s Crimes against Children Detail; 909-387-3615. Callers wishing to remain anonymous are urged to call the WE-TIP Hotline at 1-800-78-CRIME (27463) or you may leave information on the WE-TIP Hotline at www.wetip.com