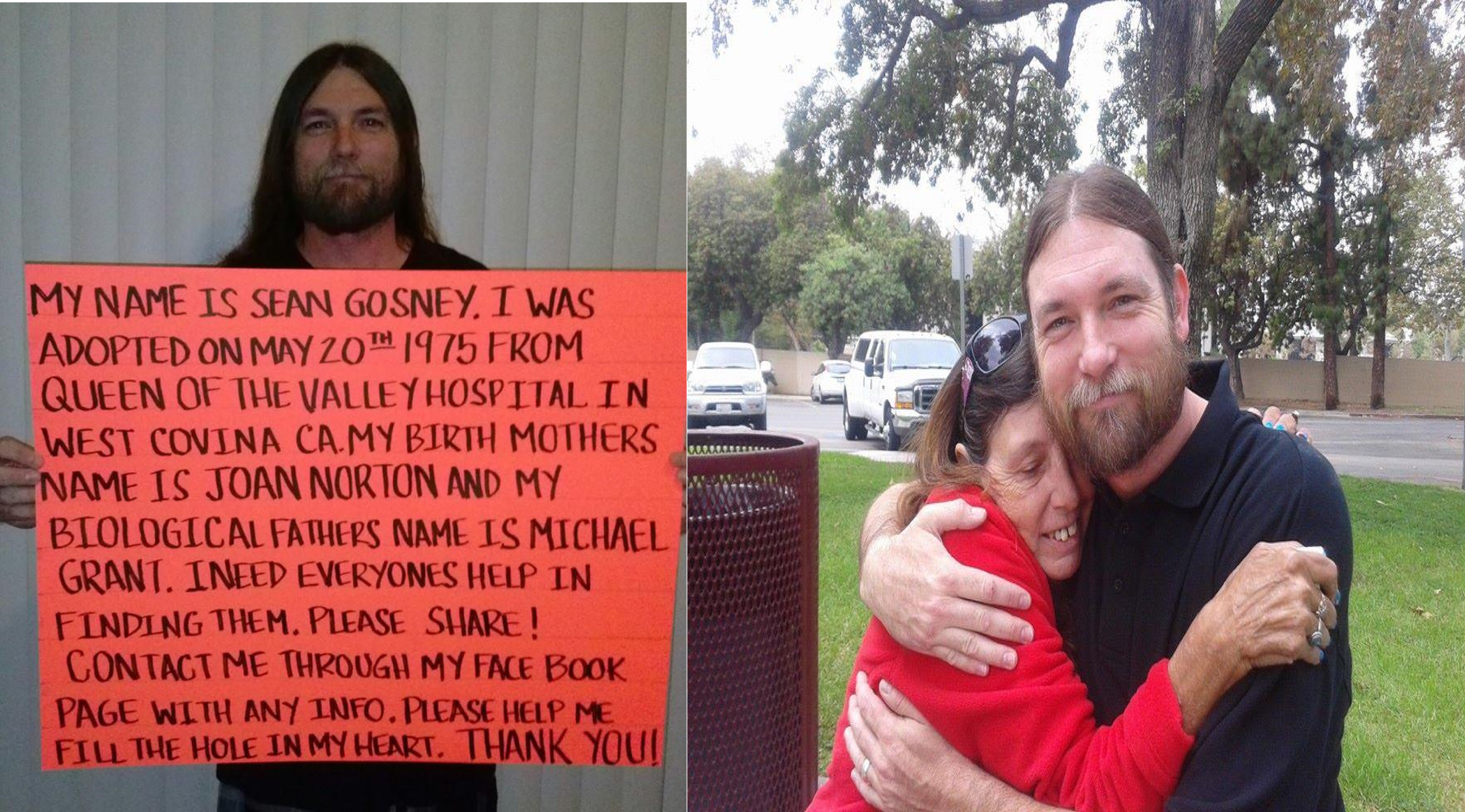 (VVNG.com)- Social Media, a toll not always something that was available once again connects an adopted son with his birth mother. 39-year-old Sean Gossney was adopted at birth from Queen of the Valley Hospital in West Covina by some great loving parents who were unable to have children of their own. He had more than many adopted children know when their search is started. Sean knew things including the hospital and his birth parents names. He also knew that his mom was 16 years old when she gave birth to him.

Upon posting his photo with informational poster board sign, it was shared by over 25,000 Facebook members and was seen by many of the friends of those who shared. Several individuals, both local and even some out-of-state reached out assisting him in the search to locate that missing piece of his heart. Gossney, the Upland father of two, a 4-year-old daughter and a 10-year-old son mentioned that regardless of whatever happened, the births of his children will always be the absolute best days of his life.

The search was on, many hitting share to get the photo hopefully into the right hands to lead him to his mother. There was a group chat opened up between about 10 individuals who were dedicated to putting time and effort into assisting in his search. Each day someone shared some discovery, many leading to dead ends, but even those efforts did not go unnoticed or unappreciated by a very grateful Gossney. Some discoveries were small pieces of the foundation to what later would place him on the path of finding his birth mother.

The photo, first shared on September 7th, according to his wife, who mentioned his shyness, was really a testament to how willing he was to step out of his comfort zone in order to locate his birth mother. Jenny Reisner, a woman who has been known to help with situations similar to these for a living got involved when referred to do so by a friend.  Although the search lead to many different states is mother was found local just a short distance from his Upland home.

Eventually, on September 20th, Reisner located the his aunt and spoke with her on the phone. During their conversations she was able to compile information to know that she would be able to lead him to his mother. Through it all, Gossney remained hesitantly excited, hoping that his birth mother would be ready and willing to meet him. “Sean’s going to call her now. His aunt Terry is cool, she lives really close to Sean. “Joan knows he’s been looking, and Terry said “she’s seen his poster, it was shared to her by a family member. She wants to meet Sean,” shared Reisner in the group message.

Soon, Gossney spoke with his aunt Terry who would be the last link to finding the birth mother that before this, he was only able to imagine and dream about. “I just got off the phone with Terry she is going to contact Joan I’m waiting to hear back. Joan has one kid who is 28 years old, a boy. Words can’t express the way I’m feeling right now. I wish I could share more, but I’m in shock this is amazing thank you guys so very much,” shared Gossney in the group message.

The pair met in an Upland park at 10:00 a.m. on Sunday morning, where they spoke, hugged and took photos. “We are definitely going to stay connected. I’m part of the family she said. I am overwhelmed with emotion,” said Gossney.