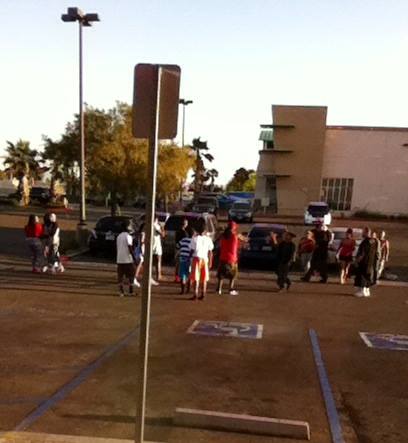 VICTORVILLE: (VVNG.com)- At approximately 7:15 p.m., on Monday, May 26th Sheriff’s dispatch received a report of a fight between 15-20 people outside of the Victorville Chuck E Cheese on Amargosa Road.

The report included a witness possibly seeing a handgun, but at the time of the initial report, there were still yet to be shots fired. The fighting was said to be between two families in the parking lot. The Chuck E. Cheese staff quickly dialed 9-1-1 and a manager went out to try to break up the fight. The store employees quickly locked the doors to prevent the fight from entering the restaurant where there were many customers, which included a large amount of children.

Irate family members exited the establishment rushing past the employees to join the fight, when one family member pulled out a gun and shot toward the other family.

Quickly, after he shot several other people, who were also involved in the fight tackled him.

The group quickly dispersed as everyone ran for cover. A restaurant employee seen a small child running alone, so he took the child inside to safety. He then realized that this 3-4 year old boy, who was running behind the family that had been left behind to fend for himself. A restaurant employee who also witnessed the incident said, “The number one thing that disappoints me about this whole incident is that the children were exposed to racial violence, profanity, gun violence, and absolute lack of moral leadership due to the parents.”

When past manager, Jaquie Kline heard of the incident she said,”That is why I am no longer the manager there. I got my jaw fractured in their last race riot. She added, “They were quite concerned about media leaks and did nothing about the death threat phone calls that I received daily for months. However, they were very prompt to put signs up next to all the phones saying “do not speak to the media”.

The police were said to be on scene within minutes of the call, but those involved in the fight were no longer at the scene. No arrests have been made and there have been no reports of injuries from the gun shot. The police did recover one bullet casing, but were unable to gather much more evidence.

The incident is still under investigation, if you witnessed the incident and have any information that may help please contact Victorville Sheriff’s Station at 760-241-2911.