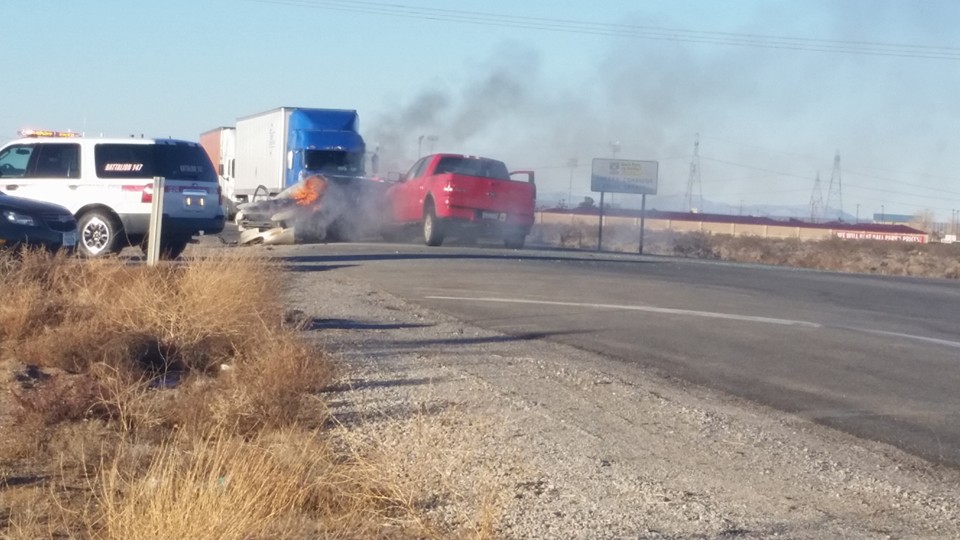 ADELANTO,CALIF:(VVNG.com)- Highway 395 is currently shut down in both directions following a two-vehicle traffic collision.

At 3:43 P.M., on Friday January 8th a red Ford pick-up truck and a gold Chrysler sedan collided near the intersection of Holly Road and Highway 395 in Adelanto.

According to witnesses, the red pick-up truck was traveling northbound on 395 and the gold sedan pulled into northbound traffic and crossed the trucks path. Following the impact the gold-colored sedan erupted into flames.

A good samaritan who witnesses the accident immediately jumped into action and quite possibly saved the drivers life.

“My husband successfully cut the seatbelt to free the injured man from the burning car on 395. Thank God no one was seriously injured,” said Janette Myers-Michaels.

Victor Valley Sheriff’s Department Watch Commander, Sgt. Rodriguez told Victor Valley News that one person was transported with unknown injuries. The road is expected to be open before 4:50 p.m. after the tow trucks remove the vehicles and debris from the roadway.