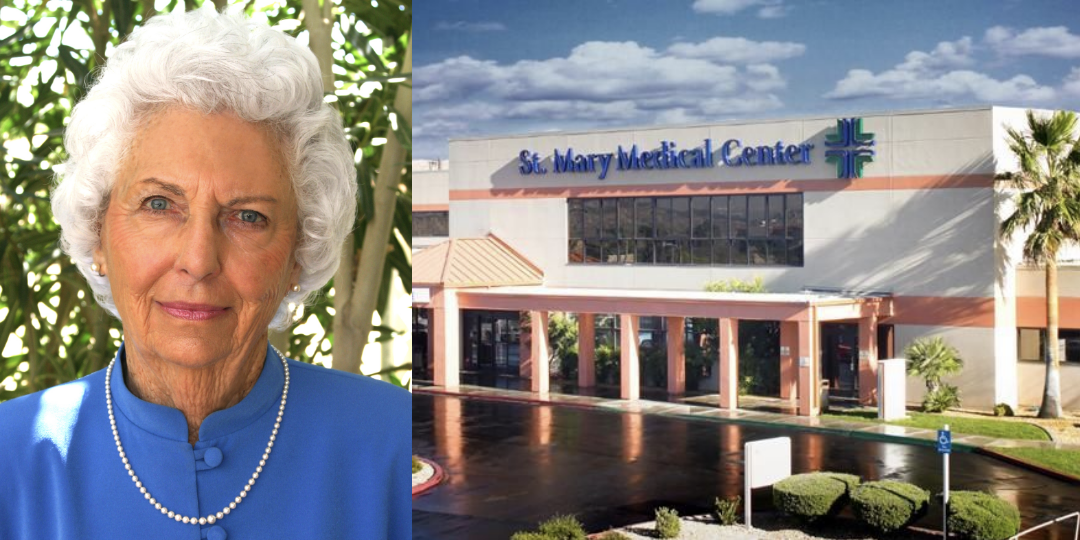 APPLE VALLEY — More than a half-century ago, Glee Heikes walked door-to-door in her hometown of Santa Monica raising money to help wipe out polio. “In those days, residents would invite you in and write a check,” she said.

Thus began a long and productive life of advocacy and fundraising for a number of causes including St. Mary Medical Center in Apple Valley where she has helped raise millions of dollars over nearly 25 years.

For her dedication to the High Desert community, Heikes will receive the Lifetime Achievement Award from the Inland Empire chapter of the Association of Fundraising Professionals (AFP). She will be given the award Nov. 12, National Philanthropy Day, at a luncheon at the Mission Inn in Riverside.

“Glee has character and commitment. She actually was nominated for Philanthropist of the Year and they, instead, decided to give her the Lifetime Achievement Award,” said John Kozyra, St. Mary’s chief philanthropy officer. “Nobody from the High Desert has ever received this award. Only one other person in all of the Inland Empire has received it.”

Kozyra credited Heikes with raising more than $7 million for the hospital in estate gifts, and millions more in special campaigns, including one that drew more than $3.1 million to rebuild the front of the hillside hospital as part of a major expansion.

Heikes has been a member of the hospital foundation board since 1995, holding many positions including board chair. She’s also active with other philanthropic groups in the community.

“Glee has helped us with each and every campaign since 1995,” said Lezli Roberts, the foundation’s director of major gifts. “She’s been here since the beginning.”

Heikes said she is committed to living her late husband’s philosophy:  “The joy of living is in the joy of giving.”

The Lifetime Achievement Award is bestowed upon an organization or individual who has made outstanding contributions to philanthropy.  Honorees have exceptional records of generosity and passion and encourage others to take philanthropic roles in their communities, according to the AFP.

“I’m so humbled,” she said. “I really appreciate the honor, but I do this from the bottom of my heart, not for any attention or publicity.”

It was Heikes’ late husband Hanley H. Heikes who chose the nonprofit Catholic hospital as the couple’s pet charity, shortly after they settled in Apple Valley 53 years ago. Hanley Heikes, a long-time business and civic leader, died in 1993. His widow created the Hanley H. Heikes Legacy Society in his name to honor those who bequeath their estates and other long-term savings to continue improving the hospital.

“Glee has always taken personal ownership of her involvement with St. Mary,” he said. “All the community knows and loves her and knows she loves the hospital.”